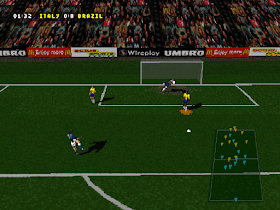 Genre: Sports
Perspective: Bird's-eye view
Visual: 2D scrolling
Sport: Football (European) / Soccer
Published by: Gremlin Interactive Limited
Developed by: Gremlin Interactive Limited
Released: 1997
Platform: PlayStation (PSX, PS1)
Actua Soccer 2 is an amazing imitation of the most popular game on the planet. And these are not empty words. After all, the first game, the pioneer of "polygonal" football, immediately gained a lot of fans, and now fans got a continuation. Here are all 92 teams of the English Professional Football League. From giants such as Leeds, United and Newcastle to the weakest teams in the fourth division (Darlington, Scarborough, etc.). All transitions from team to team (including transfers this summer) are included in the statistics, and the teams will "perform" in their original squads. To enhance the realism of the game, many stars (such as Shearer, Fowler and Wright) have simply photographic similarities. As for His Royal French Majesty Eric Cantona (favorite of the British!), So far he has not yet given his consent. Although the fans are really looking forward to it.
All stadiums look excellent, many are even renovated. Football fans will recognize Elland Road, Old Trafford and Anfield, as well as the stadiums of lower division teams (e.g. Mac Alpine Stadium in Huddersfield). Yes, even in a wide variety of weather conditions. There is fog, sun, rain and snow. In the best English traditions. Games are held in the middle of the week (as in life), the commentary is completely professional, and the sound is like sitting in a stadium! But the most important revolution took place in management. Now it is now very simple and effective.