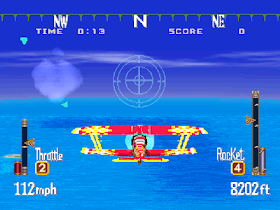 Genre: Action, Simulation
Perspective: Behind view
Gameplay: Vehicular combat simulator
Vehicular: Flight / aviation
Published by: A1 Games
Developed by: Highwaystar Co.
Released: 2002
Platform: PlayStation (PSX, PS1)
Aces Of The Air is an attempt to recreate the air battles of World War II. Missions include the destruction of enemy aircraft and bases on the ground, after the successful completion of the mission (s), the player is given access to new aircraft in the hangar. As in other similar games (for example, the Ace Combat series), each aircraft has its own unique characteristics - acceleration, maximum speed, roll when turning (stability), strength and armament. If desired, you can change the color of your car. The aircraft carries a machine gun, bombs or missiles on board, depending on the mission.
‹
›
Home
View web version