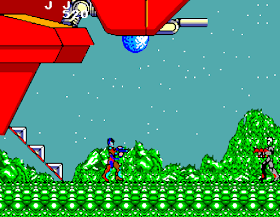 Genre: Action
Perspective: Side view
Art: Anime / manga
Visual: Fixed / flip-screen
Gameplay: Metroidvania, Platform
Setting: Sci-fi / futuristic
Published by: SEGA of America
Developed by: SEGA Enterprises Ltd.
Released: 1987
Platform: SEGA Master System
You have a difficult and dangerous mission. You are one of the White Knights - knights who maintain peace within the System. Your strength is needed to prevent the coup planned by the Empire of the North. On the territory of the Empire are the keys to your success: five floppy disks with information and a plan of destruction. If only you could get them! Laser Zillion and some other Champ, Apple and Amy protect you. Two of which (Apple and Champ) are caught in a maze, so you have to save them. The game for long hours. By the way, you are clicked J.J. Very entertaining game!
‹
›
Home
View web version