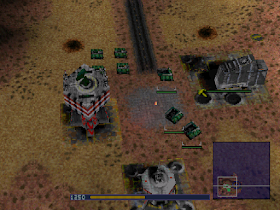 Genre: Strategy / tactics
Perspective: Bird's-eye view
Visual: Free-roaming camera
Pacing: Real-time
Gameplay: Real-time strategy
Interface: Multiple units/characters control, Point and select
Setting: Post-apocalyptic, Sci-fi / futuristic
Narrative: War
Published by: Eidos
Developed by: Pumpkin Studios
Released: 1999
Platform: PlayStation (PSX, PS1)
Warzone 2100 is a real-time military strategy game. The plot is very simple: something caused an error in the satellite defense system, and she fired several missiles around Moscow. Moscow replied ... A day later, a nuclear winter began on Earth. Less than a million people survived, who were divided into many small gangs. It happens in the year 2100, and your task is to restore civilization in a single North America. The war zone is the entire planet. Your enemies - scavengers keep valuable artifacts at their bases. After capturing and researching an artifact, you gain access to new technologies, the study of which opens up new horizons and so on. In total, the game has more than 400 technologies, that is, you have unlimited possibilities for improving your technology. The second significant difference is the hand-made design of units and vehicles. Each unit consists of three parts: weapons, body and chassis. There are more than two thousand possible combinations! The interface is thought out very well, so that a new unit can be constructed in five seconds.
The game consists of several campaigns. Within one campaign, all units and the main base are saved. The first mission of the campaign is as usual: you are building a base, factories, research centers, etc. To start the next mission, you need to equip and launch a special transport ship (10 seats). Between missions, you return to the base to better equip it or repel the attack of enemies. A repair robot itself searches for damaged equipment and “heals” it. The resource is energy generated from oil. Oil is produced from wells. For the first time in strategic games, your actions in a previous mission affect the next. Each new mission begins with the same units that you had in the previous one.
‹
›
Home
View web version