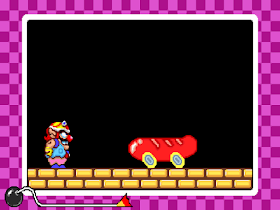 Genre: Action, Sports
Perspective: Side view, Top-down
Gameplay: Arcade, Fighting, Mini-games, Platform, Shooter
Narrative: Comedy
Published by: Nintendo of America Inc.
Developed by: Nintendo R&D1
Released: 2003
Platform: Game Boy Advance (GBA)
The distinctive feature of all games in the WarioWare saga is that they are collections of "microgames" that must be played in quick succession. Each of those micro games typically lasts for seven seconds, except in Wario Ware DIY and if not successfully completed, one life is lost.

All the microgames appear randomly within each of the phases, each one presented by a different character. Each character represents a class of microgames.

Microgames can be of three types, depending on the condition required to complete them:
In addition to these general sections, there are several microgames out of category:
‹
›
Home
View web version