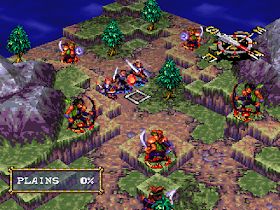 Switch to Enable "PE2 / VH1-2 Fix" and restart emulator.
Genre: Role-Playing (RPG), Strategy / tactics
Perspective: Bird's-eye view
Pacing: Turn-based
Gameplay: Tactical RPG
Setting: Fantasy
Published by: Konami of America
Developed by: Konami Computer Entertainment Tokyo Co.
Released: 1997
Platform: PlayStation (PSX, PS1)
What do we get if we mix a complex political conspiracy, intrigues of the government, versatile views in the medieval fantasy world? That's right - this is Vandal Hearts. A country mired in bloody revolutions against a corrupt and tyrannical government begins to crumble under the weight of its newly gained independence. The heroic leader of the revolution, which everyone hoped would lead the new country to a brighter future, mysteriously disappeared. And now some people are using intrigues trying to take advantage of the country's vulnerability.
... you control a team led by Ash Lambert, who represents the Internal Security Forces of Ishtariya. He was sent to investigate the disappearance of a national hero - General Magnus. Along the way, you will meet as many enemies, as well as many allies, which can be attracted to your team.
... The battles in Vandal Hearts are turn-based battles in which opposing parties take turns. It resembles a chessboard, but with figures in the role of people. Therefore, you can always think of your moves in different ways to achieve the ultimate goal, namely - victory!
‹
›
Home
View web version