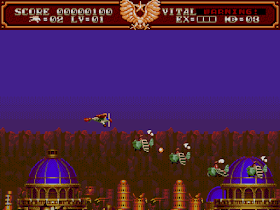 Genre: Action
Perspective: Side view
Visual: 2Dscrolling
Gameplay: Shooter
Setting: Steampunk
Published by: Flying Edge
Developed by: Hot-B Co.
Released: 1992
Platform: SEGA Genesis / Mega Drive
The game takes place around 19 eyelids in a parallel universe. The game is made in the style of  steampunk aka steam park. It all starts with a military coup in the largest city in the world Damd. Dictator General Styron seizes power in this city. The Motorhead Empire is now subordinate to him. He begins to take over the whole world. And he almost succeeded. Only one independent Silverhead republic can yet withstand its power. And all due to the fact that the entire Air Force elite is gathered in Silverhead and they have an extra weapon Imamio Thunder known as the Lightning Bomb. They are a super charge of thunder and lightning. This weapon is the most powerful weapon than any weapon in the Motorhead army. Silverhead is the last hope for freedom of the world and only they have the will to win and powerful weapons.
The game begins with the Motorhead Empire attacking the main city of the Silverhead Republic, Rahl. The player is faced with the task of protecting him. And then start an attack on the evil empire. Wherever you have to go, even on the moon.
At the beginning of the game, you can choose one of two airborne vehicles, the Striker Plane biplane or the Z-01 Zeppelin airship. They differ in speed and level of armor. As you progress through the game you have to improve your aircraft. Weapons will be improved when collecting various bonuses. The game has the ability to fire, both in the direction of travel, and in the opposite direction.
The game has seven levels and at the end of each there is a battle with the boss. Also at many levels there are mini-bosses.
‹
›
Home
View web version