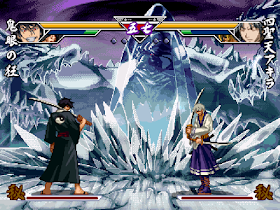 Genre: Action
Perspective: Side view
Gameplay: Fighting
Published by: Bandai
Developed by: Bandai
Released: 2002
Platform: PlayStation (PSX, PS1)
Samurai Deeper Kyo is an overhead beat 'em up based on the popular anime of the same name. The player can play as Miibu Kyoshiro, Shiina Yuya, Benitora, or Yukimura Sanada, characters from the show, who are looking for the murderer of Shiina's brother, while trying to stop the evil Demon Eyes Kyo from entering Miibu's body.
The player has a CPU controlled partner character following during the game. All characters have their own weapons, and by preforming button combinations, they can perform an array of special attacks against the hordes of evil monsters the player has to defeat to progress through the linear levels.
‹
›
Home
View web version