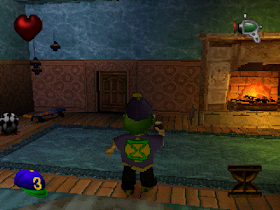 Genre: Action
Perspective: 3rd-person
Gameplay: Platform
Published by: Psygnosis Limited
Developed by: Travellers Tales (UK) Ltd.
Released: 1998
Platform: PlayStation (PSX, PS1)
Your hero is a boy whose father invented the time machine. The game takes place in three "times": past, present and future. In seven different "worlds": a medieval castle, Atlantis, a pirate ship, the Wild West, in the prehistoric era and the world of time tunnels. It is clear that each of the worlds corresponds to its own time. It’s easy for you to get rid of enemies, because you have a “time gun”! Pulled the trigger - the enemy in the tunnels of time. The main concern is to provide yourself with charges for the “pistol of time” (pick-up), and this is not easy. And even harder to assemble the six parts of the "puzzle of the time." Only by collecting all its parts can one be transported to another time zone. The graphics in the game are beyond praise, and loading time, with such an achievement, the minimum of which, unfortunately, can not be said about the gameplay - the camera in the game is terribly uncomfortable, but if you adapt, then maybe the game will give you pleasure.
‹
›
Home
View web version