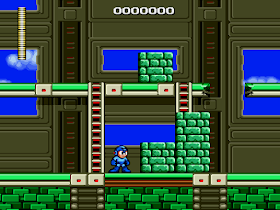 Genre: Action, Compilation
Perspective: Side view
Visual: 2D scrolling
Gameplay: Platform, Shooter
Setting: Sci-fi / futuristic
Published by: SEGA of America
Developed by: Capcom Co.
Released: 1994
Platform: SEGA Genesis / Mega Drive
One of the rare cases when a game goes far from the cartoon that gave rise to it. The cartoon itself, even among experienced anime lovers, is little known, for example I will say that in the anime fund of my city there are only a few episodes. The games themselves can be divided into three branches: Mega Man - classic (this will be discussed in this article), Mega Man-X and Mega Man Battle Network. The classic Mega Man is six parts on the NEC, the seventh on the SNES and Mega Man Bass all on the same SNES and the game on the N64. Perhaps you can also include Mega Man Soccer here, but ... well, you yourself understand. Of course there are all kinds of branches and ports to other consoles, but basically it's just a change of name. The number of parts on the NES may surprise, because all six are not pirate fakes at all, but official sequels. But all of them are rather the chapters of one story, and the evolution of the gameplay in them took place very slowly at times, without changing for two or three parts. Here is an attempt to combine the chapters into a single book and we see on the example of this game.
Mega Man - The Wily Wars is a collection of the first three parts with NES with nice graphics. The game was recreated very accurately, and playing in the dendivic versions after this already makes no sense, but after that I want to go through the remaining ones (not all players may have enough forces).
So what attracts people to this, not different from many other gameplay (run, jump and shoot) and graphics (there is much better on the sega), platforming, because the main character does not crouch, and shoot only directly?
Let us approach the answer to this question in an original way: compare this game with the beloved Contra, and since Mega Man still migrated with the dandy, we will compare it with the NES version of Contra. The movement in Mega Man is inferior to the capabilities of Contra - you can’t sit down, jump from the platform to the floor down, and there are more modes in the counter (top view, shooting range), but it is rather part of the game process and not a malfunction of the creators, it is very ergonomic and does not cause sensation, that your ward, sorry, is a brake. Enemies: here Mega Man wins in all positions - firstly, the opponents practically do not repeat from level to level, there are more combinations of enemies, though the behavior of the enemies is not much different from the counter, but still more diverse. Bosses: for both games, bosses are perhaps the most important thing for each in their own way. For Contra, this is the very variety that is lacking at the basic levels, for Maghemen - part of its history, they build the "plot" of the game (by "plot" here I mean the way of passing). Weapons: in Contra - the player simply selects the appropriate weapons from the inherent arsenal, in Mega Man - the weapons must be skillfully varied to obtain the desired result, and simply in order to kill the boss. Difficulty: in Contra - the load on your reaction gradually increases, depending on how quickly you think and press the buttons, it depends on whether you will pass the game or not. In Mega Man, your endurance is most likely checked, especially this becomes noticeable in the last stages. Graphics: the graphics are very different, I refuse to even compare, although the version of Contra for SEGI, of course, exceeds Mega Man in all respects.
And what do we get in the end? And we get the exact opposite of Contra, but not in the plane good or bad, but as two separated parts of an “ideal platform action”, each of which absorbed something of its own, something that is not in the other.
‹
›
Home
View web version