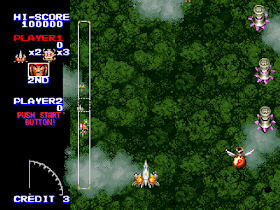 Genre: Action, Racing / driving
Perspective: Top-down
Visual: 2D scrolling
Gameplay: Arcade, Shooter
Setting: Fantasy, Sci-fi / futuristic
Published by: GAGA Communications Inc.
Developed by: Raizing Co.
Released: 1996
Platform: SEGA Saturn
Kingdom Grandprix is a 2D arcade shooter and racing combination - a continuation of Sorcer Striker. The game has many fantasy creatures and futuristic vehicles. The player chooses 1 of 8 characters - all others are rivals in the race. Player moves faster holding down the fire button (but then he is defenseless), and by getting closer to the top end of the screen. Beside this, the game is a typical vertical-scrolling shooter - player flies forward, shoots enemies and bosses, and collects various power-ups, like extra bombs, homing bullets, or more power to fire the gun. The game has twelve stages, but is non-linear - after completing each level, the player chooses one of the two levels.
‹
›
Home
View web version