Garfield and his Nine Lives (GBA) 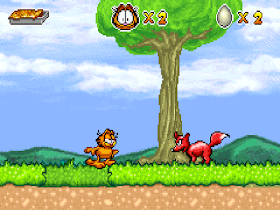 Genre: Action
Perspective: Side view
Visual: 2D scrolling
Gameplay: Platform
Published by: The Game Factory ApS
Developed by: Lucky Jump Games LLC
Released: 2006
Platform: Game Boy Advance (GBA)
Garfield and his Nine Lives have similar Search For Pooky gameplay, but with some differences. To complete each level, Garfield must perform a specific task, for example, freeing all animals in the cage or keeping Nermal from being stuck on a tree. As with the Pooky search process, Garfield collects items along the way represented by various products. He can collect up to 100 units of food per level. He can find hidden areas in the level, destroying some tiles on the floor, crawling through tunnels, or dashing thin walls. Garfield must fight the boss after completing the third, sixth and ninth levels.
The gameplay features elements similar to those found in the Cuphead and Dark Souls series of video games, with its punishing labor, precise actions, and a heavy emphasis on remembering enemy models.
‹
›
Home
View web version