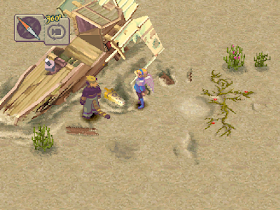 Genre: Role-Playing (RPG)
Perspective: Bird's-eye view
Visual: Isometric
Pacing: Turn-based
Gameplay: Japanese-style RPG (JRPG)
Setting: Fantasy
Published by: Capcom Entertainment
Developed by: Capcom Co.
Released: 2000
Platform: PlayStation (PSX, PS1)
The first impression is the classic console RPG. Yes, I did not expect anything else. The third part of Breath Of Fire was just a logical continuation of the old 16-bit games. Sarsom focused not on 32-bit bells and whistles, but on maintaining and improving the old gameplay. The fourth part in this sense differs little from it. I immediately recall the classics: Chrono Trigger, Pharmasy Star, etc. In Breath Of Fire, as well as in Final Fantasy, the different games in the series are not connected in any way with the plot. True, for some reason, the names of the main characters (Ryu, Nina, etc.) are preserved in Breath Of Fire, although they have nothing to do with the old Ryu and Nina. And the plot itself is as follows:
Two continents separated by the ocean have been fighting for so long that the cause of the war has already been forgotten. There was a lull, and a fragile peace was concluded. Queen Elena from Vindia went to another continent with humanitarian aid ... and disappeared. It is somehow not good to send troops in search of it, given that the peace treaty already hangs in the balance. But the UN peacekeeping forces were not yet invented. Therefore, her sister, Nina, will look for the queen. On the way, she meets a young guy named Ryu. He does not remember who he is or where he came from. It’s not even clear what kind of race he is. But he has the Dragon Eye (Dragon Eye), about which the legends say something unintelligible. Say, its owner has the power, enough to rule the whole world, and / or to cause global chaos and lawlessness. Nina herself, like her prototype in Breath Of Fire III, belongs to the race of flying people. Although she was brought up strictly, she is actually very naive and infantile. And it's hard to rely on. But nothing - the princesses are allowed a lot, if not all). The plot, as usual, is presented in the form of a huge number of scenes made on the game engine (in 1b-bit style).
Graphically, the game has improved significantly, although in the third part I had no complaints about the schedule. Everything looks more realistic. Of course, this is not Final Fantasy IX, here such realism is not required. The game is still made in an anime style. Cartoon characters and backgrounds look great, although treacherous pixels come out in some places. The camera control system is very unusual. Usually you can rotate it 360 degrees, but in some places - only 90 degrees, and in some places the camera is static. Why? That's right - when you walk in an open area, you are given complete freedom. And if you climb the mountainside, you don’t need the mountain to block heroes from you? So you have left only the "normal" (tested for bug-free?) Species. But there is a problem - you do not rotate the camera as you please, but discretely. There are only four provisions, and intermediate are not provided. Because of this, sometimes the necessary objects are not visible (if they are blocked by a roof or a rock). But in general, the camera control is done well, much better than in many other games.
In your squad (party) can be up to 6 people, but only three can be used at a time. You can freely choose which of the characters will be included in the "active" three. Such a system is used in RPG very often. The battle system is classic, turn-based. There are all standard options, in addition, a combo system is added and, of course, the highlight of the Breath of Fire is the transformation into a dragon. Ryu and Fou-Lu are able to transform and use the corresponding dragon capabilities. Ordinary magic can be learned according to the Masters system (taken from Breath Of Fire) or using Learn Enemy Skill.
The game has a huge number of story mini-games. For example, there is a person with useful information. He wants you to feed him and give him a drink, and then only he will talk to you. You need to choose dishes and drinks so that he is satisfied, and at the same time he does not overeat, and does not get drunk in a zyuza. It is very easy, but ordinary plot conversations become more fun and interesting. And a very popular thing from the third part - fishing - is here too! Moreover - it supports a special fishing joystick!
The game is very easy. Puzzles are solved quickly, monsters and even bosses cannot really do anything with you (by the way, in Final Fanasy VII it was the same). But can this be considered a disadvantage? Unlikely. In general, Breath Of Fire IV is a return to the old classic RPGs, which are very nice to return to after the ultra-modern fancy RPGs.
The plot of Breath Of Fire IV draws on a solid five, the game is full of humor, facial expressions and gestures of the heroes are done perfectly. There are no obvious flaws. So this game along with Dragon Quest VI prove that 2D sprites in a 3D world are a very good solution for RPGs.
‹
›
Home
View web version