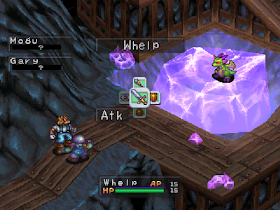 Genre: Role-Playing (RPG)
Perspective: Bird's-eye view
Visual: Isometric
Pacing: Turn-based
Art: Anime / manga
Gameplay: Japanese-style RPG (JRPG)
Setting: Fantasy
Published by: Capcom Entertainment
Developed by: Capcom Co.
Released: 1998
Platform: PlayStation (PSX, PS1)
Back in 1997, the development of games for the Playstation was actively developing. Against the background of hits that brought the console literally world fame, somehow in the background was a decent RPG released by Capcom. The successor to the "Breath of Fire series" switched to the PlayStation with SuperNintendo. The game is based on a fantasy world where people are side by side with various half-people, and this game tells about the adventures of a boy named Ryu. It all starts quite curiously - a dragon egg was found in a distant cave, a small dragon is caught and planted in a cage. On the way, he runs away, and the first clue that the player receives is, apparently, our hero is this little dragon. And this is just one of the minor plot twists.
‹
›
Home
View web version