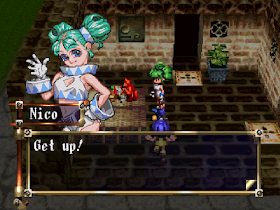 Genre: Role-Playing (RPG)
Perspective: 3rd-person
Art: Anime / manga
Pacing: Turn-based
Setting: Fantasy
Published by: Konami of America
Developed by: KCE Tokyo
Released: 1998
Platform: PlayStation (PSX, PS1)
This was the third role-playing game for the PlayStation. The first role-playing games of this type, published by the Japanese company Konami on the European market, were very popular Suikoden and Vandal Hearts. In Azure Dreams, you will get to know a great mix of tactical battles with traditional role-playing elements. The action takes place in a huge building called the Tower of the Beasts. The tower is located in the desert, built in time immemorial and rises hundreds of meters above the sands. For several centuries, all sorts of horrors have been happening in it. Despite such dubious fame, there was not a year for some brave knight to try to enter the Tower of the Beasts in order to gain power and wealth hidden in the dungeons of this cloister of darkness. As soon as the knight got inside, he discovered that even the stones themselves, from which the tower walls are built, bear a mighty spell and even a mere mortal cannot pass several floors. Not only that, thousands of monsters are located in the tower, so they also multiply there! (Huge eggs are laid out everywhere.) But it turns out that some monsters can be tamed. The taming of monsters and the trade in "monster" eggs brought success to the conquerors of the tower. In the game Azure Dreams you play the role of the son of one of the most successful conquerors, who, however, one day changed luck, as a result of which you were left an orphan seven years old. Now you are already fifteen. You became a completely independent guy and decided to conquer the tower at all costs. The second scene - Monsbaia - the city at the foot of the tower in which you live with your family. Your adventures will be extremely colorful. You will meet such unusual creatures, the existence of which you did not even suspect. It is very pleasant that, in addition to standard walks for role-playing games, you also have the opportunity to enjoy the good old battles.
‹
›
Home
View web version