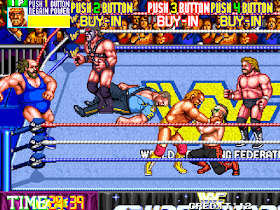 Genre: Sports
Perspective: 3rd-person
Sport: Wrestling
Published by: Technos Japan Corp.
Developed by: Technos Japan Corp.
Released: 1991
Platform: Arcade Machine
As with its predecessor, WrestleFest simulates wrestling matches. The arcade game supports up to four players and there is also the possibility of purchasing additional energy.3 Players can make team shots3. They are generally performed during a change with his partner. taken in WrestleFest differ from WWF Superstars. Two game modes are available. Without Saturday Night's Main Event mode, the player must choose two wrestlers to form a tag team to make them fight in a series of matches, and win the title held by Legion of Doom 3. After obtaining the title, the player must fight in another second series of matches and thus defeat the Legion of Doom a second time to complete the game. In Royal Rumble mode, the player chooses his fighter and wins fight during a Royal Rumble match 3. Elimination is carried out by counting three, by submission or by projection outside the ring.
The player can select up to ten players. Hulk Hogan, The Ultimate Warrior, "Million Dollar Man" Ted DiBiase and the return of The Big Boss Man from WWF Superstars. Jake "The Snake" Roberts, Sgt. Slaughter, Mr. Perfect, Earthquake, Demolition Smash and Demolition Crush are new characters, including The Legion of Doom (Hawk and Animal), who appear as end-of-level bosses4,3. Legion of Doom can take their final grip, Doomsday Device4.
‹
›
Home
View web version