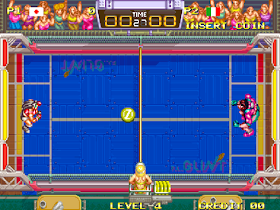 Genre: Action, Sports
Perspective: Top-down
Visual: Fixed / flip-screen
Interface: Direct control
Setting: Fantasy
Published by: Data East Corporation
Developed by: Data East Corporation
Released: 1994
Platform: Neo-Geo
An entertaining game, very similar to air hockey. There is no need to memorize long combinations of tricks, it does not require any special mental abilities. The main thing is to relax playing, having fun. The meaning here is simple: you need to throw as many flying discs into the opponent’s goal. This will bring you points and a ton of applause. Among the characters, you can choose one of six people who are assigned to their country. The whole game is saturated with a cheerful mood. This is confirmed by nice graphics and good sound. Each cast of a character’s disc is accompanied by beautiful special effects. So that the game does not seem monotonous, the developers send the gamer to compete on various courts. Each of them is distinguished by its originality. Also, one cannot fail to note the two-player game mode, which allows competing in professionalism not only with a computer, but also with a person.
‹
›
Home
View web version