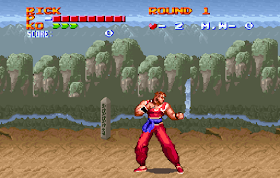 Genre: Action, Role-Playing (RPG)
Perspective: Side view
Visual: 2D scrolling
Gameplay: Fighting
Narrative: Martial arts
Published by: Culture Brain
Developed by: Culture Brain
Released: 1992
Platform: Super Nintendo (SNES)
The dull effect of the graphics, as well as the poor animation of the blows, made it a long beat 'em up, fun for a few minutes, but despite this, you can choose from several game modes: History, Player versus Player, Fight (boss fight in real time), Animation - which will take minutes of your attention.
Having decided on the level of difficulty (from one to seven), you start a game where numerous enemies are not particularly dangerous, and boss fights take place in automatic or turn-based mode (in which you can choose from several types of strokes, equipment and in the future protection ), but choosing automatic mode, you will encounter some lack of thought in every action.
Caught in water bottles is the only thing that restores your health.
Passing a greater number of levels and bosses, you will find new acquaintances and joining you other fighters who are ready to speak out against the Dragon, which can be selected through the menu, but only one out of five.
‹
›
Home
View web version