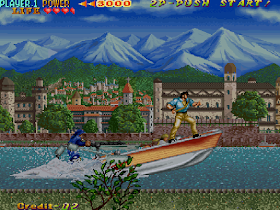 Genre: Action
Perspective: Side view
Visual: 2D scrolling
Gameplay: Arcade, Platform
Published by: Data East Corporation
Developed by: Data East Corporation
Released: 1990
Platform: Arcade Machine
The game takes place in a steampunk (or rather dieselpunk) worldview, where many scenes and settings are directly modeled after Indiana Jones and the last crusade, including the protagonist’s whip, a Nazi-like enemy army in hand, and battles that take place on biplanes as well as boats in Venice -like location. The game also contains parodies or honors for the works of Hayao Miyazaki and Buster Keaton. The game also uses a movie screen effect, where future events in the game are viewed in the background of the game.

The game takes place during the 1930s in an unidentified European country. Research on secret weapons of mass destruction was conducted in this country under the leadership of a formidable army general, Dark Ogre, but an elderly scientist decides to flee after he learned that he is manipulating as a whole. The scientist gives a key part of his research, the prism of the stone, to Charlotte’s granddaughter, as he escapes, and generally pursues the prism with the full strength of his army. Charlotte takes refuge in the house of Edward Randy, a teenager who was preparing for his first six-month date with his girlfriend, Jennifer, while Edward suddenly finds himself in the midst of a huge adventure involving a dangerous plan to destroy the world.

The player controls the main character using an 8-joystick and 2 buttons, one for attacking and one for jumping. The main character attacks with a whip, and he can attack in 8 different directions depending on the direction of pressing the joystick. It can also slide on the ground when the jump button is pressed while pushing the joystick to the side or diagonally down. Pushing the joystick up diagonally causes the character to run fast, and pushing the joystick while the character is in the air allows him to stomp enemies on the ground. A character can also make a spin attack by wrapping their whip on other objects and holding them left or right on the joystick. The character is invincible while they spin, but can only spin 4 times per attack.
The game ends when a player completes all 7 levels, and up to 2 players can play together at that time. There is no life in the game, and the remaining health of the protagonist is directly related to the number of points scored by the player at each level. The player can revive the protagonist’s health by killing more enemies, and they lose points along with health when they suffer from enemy attacks. The player is taken to the game above the screen when their points (health) reach 0. Thus, a high score is calculated as the most points the player has at any time in the game, and not the number of points they have at the end of the game.
In the game, the storyline is explained in demo screens that appear between levels. The subtitle of the corners is displayed before the start of each level.
‹
›
Home
View web version