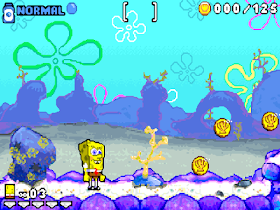 Genre: Action
Perspective: Side view
Visual: 2D scrolling
Gameplay: Platform
Published by: THQ Inc.
Developed by: Climax Group
Released: 2006
Platform: Game Boy Advance (GBA)
SpongeBob and his favorite pet snail Gary found a treasure chest in the courtyard, inside which was an old bottle. Rubbing it, Bob released the ghost of the Flying Dutchman, and the treasure was scattered all over Bikini Bottom. If our hero does not find all the treasure, then the ghost will take Gary away on his ship.
‹
›
Home
View web version