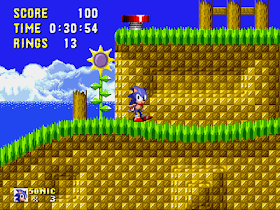 Genre: Action
Perspective: Side view
Visual: 2D scrolling
Gameplay: Platform
Art: Anime / Manga
Published by: Team Megamix
Developed by: Team Megamix
Released: 2008
Platform: SEGA CD / Mega-CD
This legendary hack began to be developed in 2005. The first playable build of the game was introduced on May 31, 2005 at the Sonic Hacking Contest 2005. In this build, the hack was very different from the final version. It had neither Spin Dash, nor Homing Attack, nor Super Peel-Out, nor Light Dash. The level structure was changed only at the first act of the Sunset Hill Zone, but the palette was changed at all levels. The music was also changed in all areas. The first version of the game was released in November of that year and did not differ much from the pre-release version. In 2006, the hack was also presented at the Sonic Hacking Contest, and the full version 2.0 was released on June 16, 2006. This version included the addition of new abilities to characters like Homing Attack and others. The final version 3.0 was released on June 30, 2007 and included a change in the structure of all levels, as well as general debugging of the game and getting rid of some bugs.
Then it was decided to transfer the hack to the SEGA-CD platform in 2008. In the new version of the game, Tails and Knuckles were added as playable characters, and the graphics of some zones were also changed. However, due to the cancellation of the project, version 4.0 was unfinished and, as such, contains some bugs and graphical glitches, from minor to major, which under certain circumstances may interfere with the gameplay. Nevertheless, this beta version of the game was very playable and quite passable for all characters. Version 4.0 was canceled in favor of developing version 5.0 with even more impressive innovations such as completely new special stages or completely new graphics for Starry Night Zone. However, later, an early build of hack version 5.0 was merged by someone for free access. As a result, videos with the gameplay on YouTube began to appear on the network, which quickly rose in the search ranking and even began to be included in the list of “recommended videos”. Gradually, the number of videos containing build 5.0 and links to the leak grew. This version of the game was also mistakenly called by some as "final", which only misled people. Subsequently, rumors began to appear that the development of the hack was completely canceled, but on August 21, 2014, one of the creators of the hack - Stealth wrote a message on the game’s official website saying that he regrets the leak of the early build of the game in 2011 and released a video on YouTube, stating that hack development is still ongoing.
New version of Starry Night Zone from build 5.0
Then there was a lull for 2 years, until April 30, 2016, Stealth posted a new message on the site. In it, the author writes that the development of the hack this time is finally canceled, because it does not seem more possible.
... Over time, there was a feeling that the whole team just picked up and parted. A lot of time passed, a lot has changed in the life of each of its participants, and the project, being close to the big release, was in jeopardy. I emphasize - the team no longer has active artists, level designers, programmers, no one; just me. This is the bitter truth - Megamix Team is no more ...
Nevertheless, the author planned to prepare a hack for the latest and most accurate release. New content should have been brought to mind and released as a bonus or separate. From that moment, there was no more news about the hack, which suggests that the development of a "neat" release was abandoned.

South island. A great place that is not limited to things like time. 15 years have passed since the first battles with Eggman. Since then, they fought in various places, but Sonic always won. Both of them received new allies, and new enemies ... Naturally, during this time, Sonic learned many new ways to fight his main enemy. He uses his skills to stop the new evil genius plan again. Eggman returns to the South Island, in the hope that he will be able to get the powerful Chaos Emeralds, and finally take a solid step in conquering the planet. Arriving on the island, he brought with him one of the Chaos Emeralds, which was considered to be missing, thereby upsetting the island’s natural balance, which has not changed for decades. Others were closed in an alternative dimension, which few can enter, and return even less. When the blue hedgehog finds out about this, he returns to South Island with his two friends Shadow and Mighty. The whole three goes to the South Island, each of them uses his unique abilities.