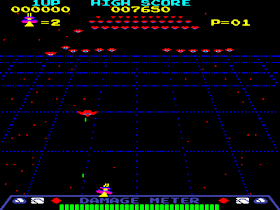 Genre: Action
Perspective: Bird's-eye view
Visual: Fixed / flip-screen
Gameplay: Arcade, Shooter
Interface: Direct control
Setting: Sci-fi / futuristic
Published by: Nintendo Co.
Developed by: Nintendo R&D1
Released: 1980
Platform: Arcade Machine
As the captain of Sonic's Spaceport, players must defend their station against enemy spaceships called Gamma Raiders, which attack with vengeance and quickly retreat to formation. The objective of the game is to destroy 48 Gamma Raiders enemies before the total disintegration of all the player's Spaceports.
Players can counter-attack with the Rapid-Fire Laser Blaster, which brings laser beams closer to the 3D field of curved vectors, while intercepting enemies. The lower on the radar screen you destroy a Gamma Raider, the more points you will get. If explosive decoys damage Sonic's spaceport, the firing speed of the Blaster laser will decrease. The Laser Blaster's "Damage Meter" will light up as damage occurs and when fully lit, it will weaken the offensive powers of the Laser Blaster. To reverse this, players must attack and destroy all remaining Gamma Raiders.
Players have a wide range of flexibility to control the difficulty levels of the game. Additional spaceports are awarded at 7,000, 10,000, 15,000, and 20,000 points, as determined by the players. The initial number of spaceports can also be preprogrammed to 3, 4, 5, or 6. When the required number of spaceships is destroyed, players receive an extra point bonus.
‹
›
Home
View web version