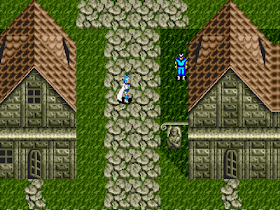 Genre: Role-Playing (RPG)
Perspective: 1st-person, Top-down
Art: Anime / manga
Pacing: Turn-based
Gameplay: Japanese-style RPG (JRPG)
Interface: Direct control, Menu structures
Setting: Fantasy
Published by: SEGA of America
Developed by: SEGA Enterprises Ltd.
Released: 1991
Platform: SEGA Genesis / Mega Drive
Phantasy Star III follows the formula of a traditional role-playing video game, which was used in previous games of the series, including reconnaissance of 2D worlds, hiring characters and random encounters with monsters with battles in a turn-based system. Unlike previous games in the main series, the role of the so-called "technique" (magic abilities) in the battle is reduced, which gives a funny contrast to the two game fractions - magic Layans and devoid of techniques, but endowed with physical strength Orakians. New features of the combat system include automatic combat through an icon menu.
The main feature that sets Phantasy Star III apart from the traditional games in the series is that the game story spans three generations of heroes. At the end of each campaign throughout the game, the protagonist gets the opportunity to marry one of the two women he encountered during his travels. This choice determines the type of the main character of the new generation, who is a child of a pair of characters of the previous generation. It also affects the gameplay - a player can become an Orakian or a mixture of an Orakian and a Layan, which will differ in their techniques and level of ownership. Two paths in the second generation, in turn, lead to four paths in the third (last) generation, and, depending on which of the four main characters is used, the final game and the final ending will be different.

Phantasy Star III - the first game in the series, built on a fantasy medieval setting, in contrast to the sci-fi themes in previous games of the series. A thousand years before the start of the game, there was a conflict provoked by the Dark Force. Orakio and his beloved Laya with the help of their friends were able to defeat the Dark Force, but at the cost of victory was the betrayal of best friends and the death of Lai and Orakio. The passages between the worlds were sealed, and, after a thousand years, people began to gradually forget about the old conflict and the existence of other worlds.
Players take control of Rhys, the Crown Prince of the Orakian kingdom of Landen. Two months before, a young girl was found on the riverbank who did not remember anything at all except her name — Maia. She was supposed to be the wife of Prince Rhys, but during the wedding ceremony a Bark dragon suddenly appears and kidnaps Maia, which aggravates the conflict between the Barkers and the Orakians. During the search for Rhys Maia, he attracts several characters to his side. In the end, it becomes clear that Maia herself is a Layan - she is the princess of the kingdom of Cille, who was kidnapped in the name of saving her people, who believed that she was stolen by hostile Orakians. It becomes apparent that the war between the Orakians and the Layans became one of the misunderstandings, in which neither side was right, and all suffered serious damage. With surprise, the heroes find out the causes of the historical conflict between the Lai and the Orakians, and, in the end, find the true source of evil.

The plot of the game proceeds simultaneously with Phantasy Star IV, since the events of both games are said to occur 1,000 years after the events of Phantasy Star II, although this has never been stated in the games themselves. In fact, in the Japanese version of the game, events go through a thousand years after the events of Phantasy Star IV. This has important implications. First of all, this means that the Devastation War between the Orakio and Laya in the American version took place only some time after leaving Palma. In the Japanese version, this means that the Dark Force is still present, despite the manifestation away from Profound Darkness in the Phantasy Star IV.
The broken Worldship, visible on the surface of Motavia in the Phantasy Star IV, is similar to the ship Alisa III. However, this is not the ship itself, but one of the rescue shuttles of the evacuation fleet, which escaped destruction in Palm in the second part of the series. Android Ren (born Wren), appearing in this game, is not related to Ren from Phantasy Star IV, this is just a similar model. In the Japanese version of the game, Ren is named Searren, while in the fourth game he is named Forren.
‹
›
Home
View web version