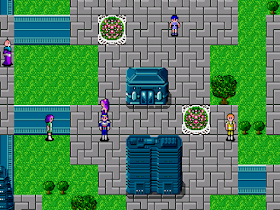 Genre: Role-Playing (RPG)
Perspective: Behind view, Top-down
Art: Anime / manga
Pacing: Turn-based
Gameplay: Japanese-style RPG (JRPG)
Interface: Direct control, Menu structures
Setting: Sci-fi / futuristic
Published by: SEGA of America
Developed by: SEGA Enterprises Ltd.
Released: 1990
Platform: SEGA Genesis / Mega Drive
Events take place a thousand years after the events of the first part. The main character becomes a special state agent named Yusis. His mission is to investigate a situation in which the central supercomputer that controls life support on the planet Motavia, “Mother Brain” began to malfunction for an unknown reason, as a result of which the population of the planet was in danger.
Phantasy Star II is the first 16-bit role-playing game released on the western market. She came out a few months earlier than the original 8-bit games of the Final Fantasy series on NES and used a six-megabyte cartridge. For this reason, Phastasy Star II is much more voluminous than other similar games that came out before it, which made it the new standard of the genre. Many elements (such as a sci-fi setting, casual battles and a high level of difficulty) were adopted from the first part of the game, however, innovations such as a changeable environment, various graphic improvements and a plot driven by the biography and story of the characters appeared.
Since its launch, Phantasy Star has been widely acclaimed by critics, fans, and role-playing game enthusiasts. It is seen as a game ahead of its time largely due to the rich plot and serious attitude to those issues that developers of other game series will think about only after a few years. The series of games is considered one of the greatest and most influential series of role-playing games of all time.

The gameplay of the second part is similar to the first game of the series. A turn-based combat system allows the player to control the actions of a team of up to four people. Each of the eight characters has his own preferences regarding weapons and equipment, and is also able to develop the techniques characteristic of his profession (a local science fiction analogue of magic in traditional fantasy). With their help, the player must defeat the enemies on the world map and in the dungeons to advance the plot.
In this part of the game, the first-person view, which was used in the first part both during moving around the dungeon and during battles, was abandoned. Instead, a top-side projection was used for reconnaissance and a third-person view in battles.
‹
›
Home
View web version