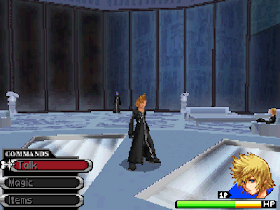 Genre: Action, Role-Playing (RPG)
Perspective: Bird's-eye view
Art: Anime / manga
Published by: Disney Interactive Studios, Square Enix
Developed by: h.a.n.d. Inc., Square Enix Co.
Released: 2009
Platform: Nintendo DS (NDS)
The original release date was May 30, 2009 in Japan. Subsequently, it was published in North America on September 29 and in Europe on October 8 of the same year. It was directed by Tetsuya Nomura and co-directed by Tomohiro Hasegawa. It was decided to design the game for Nintendo DS against official plans, which meant that to maintain the style of play of previous deliveries certain movements and skills were eliminated mainly due to the lack of buttons on the console. However, it does not use the console's own features too much (such as the touch screen, the microphone ...) and the game style is somewhat different from those of the other games.

It is presented with 3D graphics, and with only two game modes: the story mode (single player), where the player chooses the difficulty when starting the game or can load one of the three saved games, and the mission mode , where 4 players can complete various missions and obtain crowns. The mission mode has the entire organization XIII, Xion being unlockable and the characters that are not part of that organization (Riku, King Mickey, Sora, Goofy and Donald). The cinema is unlockable by completing the game once and you can watch the videos and animations of the game.

When Sora turns into a Heartless to free his friend Kairi's heart in KH 1, his incorporeal, Roxas, is born. However, unlike the rest of the incorporeal, Roxas retains a human body and remembers small pieces of his past life as Sora. As soon as Roxas is found by Xemnas, the leader of Organization XIII, he is recruited as his thirteenth member. Every day they send him to do missions to other worlds, both accompanied by his other members and only, to kill the Heartless, freeing stolen hearts and achieving the goal of the Organization that is to invoke Kingdom Hearts and become complete beings. While in the Organization, he is supervised by Axel, and they quickly become friends. Shortly after the incorporation of Roxas, a fourteenth member appears: Xion, who knows nothing about his past and, like Roxas, can also wield the keyblade, and little by little they begin to know more and form a trio of friends.
However, different events that cause the group to disperse begin to occur. Diz and Naminé watch Sora's progress in remembering their lost memories in "Chain of Memories." Roxas begins to wonder why he can wield the keyblade and begins to doubt about the objectives of the Organization. Xion, meanwhile, is confused after an encounter with Riku, who asks him who she is and why he wields the key-sword, and begins to separate from his friends. Soon Xion's desire to discover its origin will make him abandon Axel and Roxas, becoming hostile to them when they try to stop her.
A short time later, Xion discovers the truth about her: it is an imperfect replica of Sora, created from her memories by Xemnas as a "Plan B" in case Roxas, which the Organization was trying to exploit, turned out not to be of utility. In addition, Naminé's attempts to remind Sora of his memories, not only affect Roxas, but also Xion to the point of becoming, physically like him, absorbing Roxas power and winning her. Xion, helped by Riku and Naminé, decides to sacrifice herself to return the memories to Sora, at the cost of no one remembering her.To do so, she decides to face Roxas because he also has some memories necessary for Sora to wake up. After a very hard battle, going through different worlds and forms, Xion is defeated by Roxas. Although Roxas initially forgets her, when he sees her dying her memories are reactivated and tears come to her at the same time that Xion dies, but not before asking her to stop Xemnas and release Kingdom Hearts.
Full of anger over the death of Xion and his unsolved questions, Roxas decides to face Organization XIII alone, leaving Axel out of the way. He meets Riku and they fight. When he is almost defeated, he turns to the power of the darkness that is in his heart, giving him the power to defeat Roxas, but also giving him the appearance of Ansem, which is linked to his darkness. Riku and Diz place Roxas in the virtual "Twilight Villa" so that he can merge with Sora, putting the scene already known in "Kingdom Hearts II".
‹
›
Home
View web version