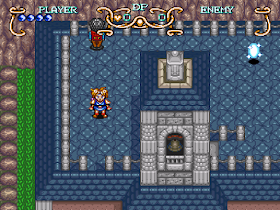 Genre: Role-Playing (RPG)
Perspective: Top-down
Visual: 2D scrolling
Gameplay: Action RPG
Setting: Fantasy
Published by: Nintendo of America Inc.
Developed by: Quintet Co.
Released: 1994
Platform: Super Nintendo (SNES)
The plot of Illusion of Gaia is unlikely to overwhelm you with its originality or touch to tears. In the end, how many times have we seen a bunch of kids go on a journey, which eventually spills out to save the world? But still, there are some points in Illusion of Gaia that can really catch your attention. For example, it’s not very often in JRPG that you come across “trips without rose-colored glasses”. That is, they will show you that adventures are not only admiring the sunset and gatherings around the campfire, but also great difficulties: after the shipwreck, you will have to eat raw fish and get scurvy, and in a multi-kilometer underground tunnel the only food will be inedible mushrooms. A special gloom is also added by a certain gloominess of the world of Illusion of Gaia, in which there are such things as the slave trade, cannibalism, and in the mines you can easily meet a morgue where the remains of workers who could not stand the hard work rest. And given the numerous references to historical / mythical locations (the Great Wall of China, the pyramids, Angkor Wat, the Tower of Babel), we can say that Illusion of Gaia still managed to create its own individual atmosphere, which stands out from other numerous adventure RPG's.
But in general, the plot of the plot is as follows. A princess calls a boy named Will to help her escape from the castle, where she, you see, is bored. The guy agrees, especially since he himself had long wanted to go on a journey in search of his missing father. And soon, by the will of fate, he throws them into the village, where the elder declares that Will’s entrusted with the honorable mission of saving the world from the coming comet. In this connection, Will’s to find six mystical statues and install them on top of the Tower of Babel, in which his father disappeared. It should be noted that unlike Soul Blazer’a, the main character is not dumb here. He has a fairly decent number of dialogs, although not too detailed.

As you understand, the plot of Illusion of Gaia has made a significant step forward compared to the simple story of Soul Blazer’a. The gameplay is also not far behind. Although the system of monster generators is not used here, yet again you have to deal with all the enemies in the locations. The fact is that only after you destroy all the critters will you be given a status boost. Conventional EXP / Levels are not here. Crystals from monsters are still falling out, but they serve a completely different purpose. If you collect 100 pieces, then after death you will start from the nearest place. But magic, like equipment, is not at all in the game.
But in the game there are three playable characters. More precisely, the character is one, but he will transform into two other soldiers: the dark knight Freedan'a and the shapeless shadow Shadow. Of course, they all have different features and capabilities, so the characters will have to be changed not only for battles with enemies, but also for solving puzzles. So Will can climb slippery slopes, Freedan kill enemies in the distance, and Shadow seep through the floor. Of course, this is not all of their capabilities, but I think you caught the main point.

It remains only to talk about the complexity of the game. Illusion of Gaia is much more complicated than Soul Blazer. Locations are much larger and more confusing, and some bosses will force you to grit your teeth so that you can hear your neighbors. Remember the free healing herb at Soul Blazer? Forget about this freebie! In Illusion of Gaia, this grass is a valuable rarity, of which you will meet no more than a dozen in the entire game. Accordingly, you will have to use it only in the most extreme cases (which are the bosses). In the locations themselves, there is still the opportunity to heal at the save point, and also sometimes (very rarely) life-restoring spheres fly out of enemies.
‹
›
Home
View web version