Hajime no Ippo: The Fighting! (PS1) 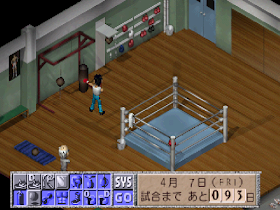 Genre: Sports
Perspective: 3rd-person
Sport: Boxing
Published by: Kodansha
Developed by: Kodansha
Released: 1997
Platform: PlayStation (PSX, PS1)
George Morikawa's sports manga and anime series shot on it. Manga has been published since 1989 in the weekly Japanese magazine Weekly Shonen Magazine. Currently, the manga contains 118 volumes and continues to be released. Ippo Makunoti is a timid high school student who has no friends due to the fact that he is always busy helping his mother in their family fishing business. Once, after Ippo was beaten by a group of hooligans led by Umezawa, he was helped by a professional middle-weight boxer who drove off the hooligans and took Ippo to the Kamogawa Hall, owned by former boxer Genji Kamogawa, to heal his wounds. When Ippo woke up from the sounds of boxing training, the boxer who saved him, Mamoru Takamura, tried to cheer him up, allowing him to vent his frustration on the punching bag. This was Ippo's first acquaintance with boxing. After this incident, Ippo began to train regularly. His professional career in Japanese boxing began with two sparring matches with his peer Itiro Miyata.

Hajime no Ippo: The Fighting! - a sports game where the player is offered two game modes: History mode, where the player in the role of Ippo is trained at a boxing school, adopting fighting skills and participating in grueling training for subsequent participation in boxing matches. The second game mode allows you to create your own fighter. Hajime no Ippo: The Fighting! not a typical sports game where the player only takes part in fights; in addition, the game tries to recreate the atmosphere of a boxing school.
‹
›
Home
View web version