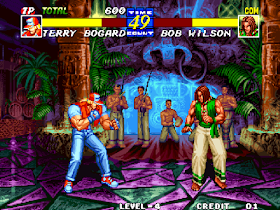 Genre: Action
Perspective: Side view
Visual: 2D scrolling
Art: Anime / manga
Gameplay: Fighting
Setting: Fantasy
Interface: Direct control
Published by: SNK of America
Developed by: SNK Corporation
Released: 1995
Platform: Neo-Geo
This is a pretty strong project from the whole series and a worthy carrier of the fighting genre. The game begins with a beautiful screensaver. From it you can understand that this part of the series has become more serious. There are already ten fighters here. New techniques have become even more beautiful. The various stages are already better and have added dynamics. Gameplay has become much more interesting. The speed of movement has increased and this only decorates the game. Added the ability to jerk forward and backward. From this it became much more convenient to fight. The musical accompaniment of the game is well chosen. This makes the project better and more interesting.
‹
›
Home
View web version