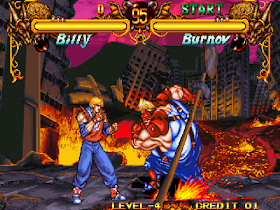 Genre: Action
Perspective: Side view
Visual: 2D scrolling
Art: Anime / manga
Gameplay: Fighting
Narrative: Martial arts
Published by: SNK of America
Developed by: Technos Japan Corp.
Released: 1995
Platform: Neo-Geo
The player has 10 selectable characters plus two secrets available only in console mode by entering a code. The game has two or three unmodifiable rounds with direct elimination of the opponents. The order of the opponents is random until the appearance of the two bosses, Duke and Shuko. Characteristic of the game is that if you take damage or perform moves and combinations they give a blue charge superimposed simultaneously on the normal energy bar, which once charged the character can perform transformations or two special secret moves via key combinations (the so-called "Charge moves").
The characters and menu settings are inspired by the 1994 Double Dragon movie, which also features the intro of the game. We can actually find the brothers Billy and Jimmy transforming into the "dragon mode", Marian represented as a gang leader and the inclusion of Koga Shuko as the game's final opponent. However the characters are depicted in a cartoon or anime style different from their real counterpart and only five of the game's twelve fighters are actually featured in the movie while the rest are new characters created specifically for the game.