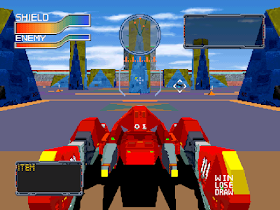 Genre: Action
Perspective: Behind view
Gameplay: Shooter
Vehicular: Mecha / giant robot
Setting: Sci-fi / futuristic
Published by: Namco Hometek Inc.
Developed by: Namco Limited
Released: 1995
Platform: PlayStation (PSX, PS1)
The action of the game Cyber Sled takes place in 2067, where you are waiting for a tank duel with a number of opponents. In terms of game action, it is somewhat reminiscent of the already classic 3D Tank Duel. At your disposal are six tanks, the differences between which are in speed, shield strength, weapon power and maneuverability. Unfortunately, she herself hardly claims to become a classic of the game world. The gameplay is going quite slowly here, the graphic solution does not cause enthusiasm. Nevertheless, in the variant of the duel between two players, in the split-screen mode, this game can bring you a lot of pleasure.

Use Extra Sleds: Enter the following code on the title screen: Up, Left, Down, Right, Up, Triangle, Up, Right, Down, Left, Up, Circle.
‹
›
Home
View web version