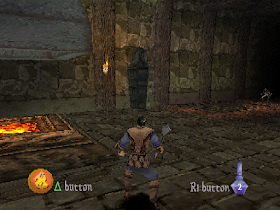 Genre: Action, Role-Playing (RPG)
Perspective: Behind view
Setting: Fantasy
Published by: 3DO Company
Developed by: 3DO Company
Released: 2000
Platform: PlayStation (PSX, PS1)
How would you like it if monsters attacked your village, killed your family and left you to die? It's good that you have a PlayStation, and you do not mind playing a little this Action RPG game and avenge the hated enemies. In Crusaders Of Might And Magic, you are known as Drake, a strong hero with a talent for magic and a penchant for violence. Once drawn into the struggle to free land from the legions of the resurrected legions of Necros, you will travel through nine areas - damp forests, stately castles and oppressive dungeons. You will encounter dodgy villagers, courageous guards and vile endless demons. At its core, this is a 3D game in the style of Legacy Of Kain - Soul Reaver. You can run, jump, climb, attack and cast spells. Most of the time you will spend waving weapons, acquiring items, and chattering with the locals. In addition, you will have a wide selection of various weapons, armor and spells. Monsters have their strengths and weaknesses for different weapons and spells. At the end of the crusade you will find a battle with Necros himself.
The most difficult part of the game is the control system. Indeed, it is not easy to switch weapons or objects during a hot fight, but if you understand all this, then the battle system will seem pleasant to you, and research is quite easy. Corridors, dungeons, forests and castles are well designed, filled with torches, tapestries, vines and many other intricacies that adorn the interiors. Hero models are exceptional, with a believable level of animation. The mantle flutters in the wind, swords carve sparks, ball lightning leaves dents. After playing for about 30 minutes and noticing the light from the captain’s sword, you will also be impressed.
The sound in the game is also above average, which will satisfy even the fastidious fans. The music is charming and diverse. A decent combination of classical orchestral music and New Era style has been made. The sounds of the weapon are also exceptional, varying in tone depending on where the blow is delivered. The murmurs, growls, and guttural sounds of the Legion's monsters are even more impressive. The characters in the game have many speeches that relate to the plot and violate the monotony of the study.
Interesting: Initially, it was planned to release both versions of the game at the same time by Christmas in 1999. However, the version for the Playstation was developed over several years, while the team developing the version for Windows was given only 7 months to create a full-fledged third-person game based on the existing Requiem: Avenging Angel first-person shooter engine.

Endless items: Successfully complete the game and save. Then start a new game with infinite mana and items at your disposal, including talismans, runes, weapons, spells and defense. Only your health will not be infinite.
‹
›
Home
View web version