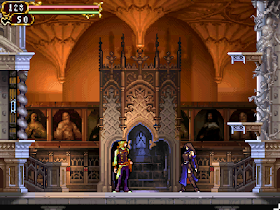 The events of the game take place after the Richter Belmont era and the plot of Symphony of the Night, somewhere in the 19th century. Since, by that time, the Belmont clan had disappeared, several magic orders were created to fight against Dracula. The most promising among them was the Order - Order of Ecclesia, which created a triad of magic symbols based on the power of Dracula, called "Dominus". Shanoa was chosen as the leader of the order, Barlowe, as a human hypostasis for the energy of Dominus. When the order began a magical ritual, the tablets of Dominus (anger, hatred, agony) were abducted by another member of the organization - Albus, as a result of which Shanoa lost her memories and emotions. She sets off on a journey to regain her memory, unaware of the true intentions of Albus.
‹
›
Home
View web version