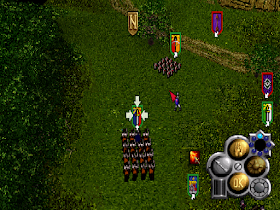 Genre: Role-Playing (RPG), Strategy / tactics
Perspective: Bird's-eye view
Pacing: Real-time
Setting: Fantasy
Published by: Electronic Arts
Developed by: Mindscape International Ltd.
Released: 1998
Platform: PlayStation (PSX, PS1)
The citadel of the Necromancer King will fall! Forward - and death is dead! The cavalry went first, knocking out the dust with their hooves - the best of the best, the color of the royal guard cut into the ranks of the undead, and the dead fell, unable to withstand the onslaught of steel. Behind the cavalry, under the cover of archers, the infantry rushed into battle - the queen of the fields. Suddenly, an army of skeleton archers began to grow slowly from roadside dust, gathering in parts. The light magician raised his staff, and sang in a chant - the skulls and bones flamed with an orange flame. A squad of rotten zombies appeared from behind a nearby hill - the living and the dead converged in close combat. The royal cannon released the core. Having drawn a curved arc, the eye fell right into the necromancer - he screamed sharply and scattered into black dust, which immediately swirled and carried away by a merciful wind.
Well, the Necromancer King Nagash doesn’t want to lie calmly in his pyramid-tomb once every five to ten thousand years, he is sure to get out of the crypt and collect hordes of zombies, mummies, animated skeletons, vampires and other dark personalities going to war on the surrounding lands. In addition, the green goblins and just the bandits became insolent again and began to attack the settlements of people, elves and gnomes. It is clear that the latter do not want to join Nagash’s dead army at all. It is for this very reason that once again a war erupts between the living and the dead.
Dark Omen game is quite long, with many missions and it can take more than one week to complete it. The authors have achieved one important factor - the game does not bother, and the missions are distinguished by an enviable originality and variety. Well, tell me, it may be more important for a strategic game. Immediately upset Warcraft II fans - you can play Dark Omen only for the forces of good. The game belongs to the tactical strategy genre, which means that the player will not have to bother with collecting all kinds of natural resources, the economic system is simplified to a minimum: he completed missions and received money. Most attention should be paid to the battle itself. Warhamrner: Dark Omen is not C&C for you, where everything was decided by the number of troops, here a small but well-established detachment can easily fight off six times the enemy’s forces. During the battle, the terrain is taken into account - it can be seen much better from the elevation, and the projectile or arrow fired from the hill flies an order of magnitude further. Under your strict guidance are living troops; for example, gnomes - great fighters - are terribly afraid of night goblins; elves - they hate goblins, but they are afraid of the dead; and living corpses, in turn, are not afraid of anything but fire. The enemy’s intelligence can be rated as above average, it cannot be said that the enemy is a real genius, but you won’t just get a victory. The variety of troops in the game is large enough to meet the requirements of the most picky players.

Classification of types of troops and the main strategic advice