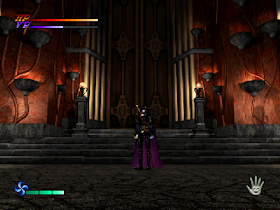 Genre: Action
Perspective: 3rd-person
Art: Anime / manga
Gameplay: Puzzle elements, Survival horror
Setting: Fantasy
Published by: Jaleco USA
Developed by: Victor Interactive Software
Released: 2000
Platform: PlayStation (PSX, PS1)
The game got a lot of negative from foreign magazines, but nevertheless it is quite interesting, especially when you consider that it was made on the basis of an excellent cartoon about the problems of communication between vampires and people among themselves. Having mastered control, I went through the game according to one of the scenarios (non-linear plot), which I decided to bring to your attention.
It all starts with a hand-drawn cut scene, where the main character is hired for money to go to the castle of vampires. There, he must find and return to the employer his abducted daughter Charlotte. In case of success, in addition to the advance, an astronomical sum of awards was promised. The employer honestly explained that such a high fee is due to the fact that you are not the first - a relative of the employer has already sent other vampire hunters to the castle, but Charlotte still does not. Relax, looking at the magnificent 3D-intro, and then set the difficulty level (I chose no weaker than normal) and listen to a short lecture on the events that preceded the game. And it's time to finally get acquainted with the main character.
Name - Dunpeal, allows familiarly call him D. Profession - vampire hunter. And this despite the fact that he is the son of a vampire nobleman and himself half a vampire. And he also has a left hand - his partner, who can speak and possess magic.

The control is not too convenient: the cross makes the hero run, and to walk calmly, you need to hold L1. A quick double tap on the crosspiece ⇦ or ⇨ allows you to bounce from the dangers. X - jump, ■ - use of hand magic or use of an item (if it is set in the inventory). There are three types of magic and is switched by the SELECT button (in this case, the item is removed from the inventory). A view of the magic is shown at the bottom left of the screen.
The image of the blue spiral means that when using this type of magic you can eat your enemy (if he is weakened and fundamentally edible). In order to weaken the enemy, usually three preliminary blows with a sword are enough. At breakfast, the enemy’s magic is not only not wasted, but, on the contrary, the whole three-level scale is replenished. Image of red fireballs - homing fire from the hand (does not affect bosses). I recommend, using the magic of fire, immediately switch to eating and periodically press the hand button. In this case, it is possible (if there are many enemies in the room) to save Dee's health and completely restore the magic scale.
Green stars are the magic of healing. Restores health and heals poison.
An attack or treatment requires at least one scale to be completely filled.
▲ button - get or remove the sword. If Dee draws the sword on the run, he will make a powerful sharp attack with the sword forward, unexpected for the enemy. This strike is virtually non-blocking and is approximately equivalent in power to two conventional sword strikes. Button ● when a sword is pulled out - attack with a sword. And so it allows you to take items and open doors.
Shift R1 - close with a cloak, protection against some types of enemy attacks.
Pressing L2 + R2 - instantly rotate 180 °.
START button - enter the inventory where you can immediately use the desired item with the ● button. In the inventory, pressing ▲, you can activate the memory card, and saving is possible anywhere.
Pressing L1 allows you to see the level map (if you have one). Exit inventory using the ● button.

Having picked up a level map and Potion in the chest in the chests, we go into the castle. First we go straight, we go up the stairs and at the portrait of the vampires of Carmilla we take the red key (Red Key). At the same time, we listen by hand to the story of this Carmilla herself, who became famous for such bloody orgies that she incurred the wrath of the ruler of vampires! On the sides and behind the portrait are doors locked while. Get back down and go through the red door to the right (if you are guided by the map).

Now we go down to this very unlocked door. God be with him, with Magira and the balcony on which he was waiting for you. In the room you will find a girl, and in the opposite corner some things and a map of the Tower of the Moon. Leila will appear and help carry Charlotte to her chambers (where did the wolf sperm come from). Leaving the brave hunter to guard the girl, Dee, after inspecting the room (found Elemental Stone), again goes to the Tower of the Moon. On the ground floor, turn on the planetarium and pick up another magic stone. On the second, carefully follow the light path and take the Gold Plate. Now head to the control room on the third floor. You need the right password - REIGNS OVER (guess why). On the monitor we see Charlotte heading somewhere. Where is Leila?
And Charlotte is again abducted! Again, you have to explore the already accessible territory.
Before leaving the repair room, pick up the Purple Gem from the box near the old spacecraft. Again to the vampiress portrait and from it to the left into the unexamined Red Tube room. Take there the key for the music box (Key for Music Box) and go to visit other rooms. Listen to the melody from the music box, and then repeat it on the device near the door with the image of a spider (if you have a bear in your ear and you are not able to repeat five notes, I am powerless). Continue your journey and find the Plate of Water and the Plate of Wind. Through the familiar eastern gallery near the first game room, go to the last unexplored territory of the 1F Living Room in this part of the castle. Having picked up a magic stone for a hand, enter the Room of Candles. Calm the bats excited by your appearance, extinguish lamps with blows of a sword - the door will open. And here you are in the bedroom (Bed Room). There, of course, twilight reigns. Striking the lamp for a short time forces it to turn on, but, nevertheless, you must move carefully. Among the trophies get a green gem.
Return to the third floor and go through the door with the знаком sign and you will enter the Passage to Lodge territory. Activate your gems on the panel and Dee will receive the Plate of Fire. Go to the portrait of Carmilla, followed by a secret passage. Activate found boards, but ... one is not enough! Leila will go down on the elevator and Borgoff will appear a bit later. Well, fanatic! You’ll have to fight him again. Do not stand still, or else you’ll slam the head with an energy triangle. You can use the darts a little bit , but at least two dozen save. Useful. Take away from the defeated hunt and a fee of land. But when you turn your back on Borgoff, he will try to hit you treacherously low. And then Leila will make a choice ... Thank you for your help, dear, but it’s dangerous outside the secret door. Sit here for now. There’s an elevator outside the door. On the ground floor, Dee finds a passage to that same old rocket, but the find on the third floor is more entertaining.There, Meyer Link, pinned by a stake to the wall, but talkative. flight. Having captured the girl, the vampiressa is going to remove the spell imposed on her by the ruler of the vampires with her blood. After that, Carmilla would fly to the city of Nights, there she would receive superpower, and bloody hell would make people on earth. "Dee, please save Charlotte!" Having pulled the aspen from the simpleton in love, we again go to save Charlotte and the world. The door to salvation to the right of Mayer.
Again the ghost of Carmilla. This time not threats, generous promises. "Join me, Dee. I will share my future power. You’re half a vampire, why are you protecting these ungrateful mortals for whom you will forever remain a monster! " In general, it is true, but thanks to the left hand, she reminded Dee that he was half human. In short, he sent Carmilla to the forest. Here are the chambers of Carmilla. If you have not met Magira for the second time, then he will appear here. After the werewolf calms down, a battle with Carmilla in her true guise will follow. I was almost late. The sword of the vampire lord, who prevented vampiress from climbing out of the coffin with his magic, falls down, and Carmilla appears before us in all her glory. First chop the left and right tentacles with which Carmilla is trying to hit you. With her attacks, it is better to stand at the door itself, where the tentacles do not reach you. Then run up close to the pedestal on which it stands, and chop in a jump. Do not forget to be treated. That's all. Who are you, Dee, why did the sword of the vampire lord obey you?
Meyer picks up the rescued Charlotte from the floor and disappears with her. Dee goes to the space rocket, the restless Leila appears again (by the way, on time).

Conversation with Mayer, and the last battle

Darts, raid, and Link down. "Dee, why didn't you finish me off?" “Well, you are weird,” Dee replies. "Fly away to the city of Nights with your love, and I will inform Charlotte’s father that she’s dead. Happy end." The castle is crumbling (as in Castellania). Dee and Leila are watching them fly from the ruins a ship with a strange couple of lovers. A vampire and an earthly girl. But even Dee is the son of a vampire and an ordinary woman ...
‹
›
Home
View web version