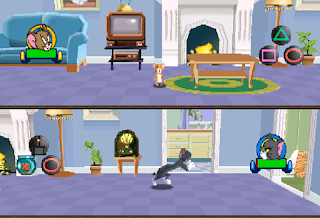 Genre: Action
Perspective: Side view
Published by: NewKidCo
Developed by: Warthog Games Ltd.
Released: 2000
Platform: PlayStation (PSX, PS1)
It is hard to say which genre this game belongs to. It seems like a platformer, like fighting game, like a multiplayer timekiller. But no matter how you call her, she will remain a good, interesting, unique game. You will play for one of the heroes of the popular television series "Tom and Jerry." Your task is to annoy your opponent as much as possible, placing traps and obstacles in levels. Put a banana peel on the floor? Spill milk? Throw a hammer or mop at the enemy? Or maybe throw a mousetrap under your feet?
‹
›
Home
View web version