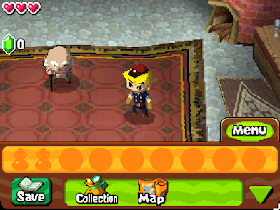 Genre: Action
Perspective: Bird's-eye view
Visual: Fixed / flip-screen
Gameplay: Metroidvania, Puzzle elements
Vehicular: Train
Interface: Point and select
Setting: Fantasy
Published by: Nintendo of America Inc.
Developed by: Nintendo EAD
Released: 2009
Platform: Nintendo DS (NDS)
The action of the game Spirit Tracks originates several decades after the events of Phantom Hourglass. Link, trained as a steam engine driver, arrives at a graduation ceremony where Princess Zelda asks him to meet her at her quarters, beingware of Chancellor Cole. After the meeting, Link learns that from their world the railways called Spirit Tracks have begun to disappear. These roads are magical shackles that hold back the ancient evil imprisoned under Khairul. To find out the cause of the disappearance of the railways, they with the princess goes to the Tower of Spirits. However, after Link and Zelda leave the castle, they are attacked by Chancellor Cole and kidnap the princess's body in order to use her energy to awaken an ancient evil. At the same time, Zelda’s soul leaves the body, and Link is one of the few who can see her. Link and Zelda set off on a journey to restore the Spirit Tracks, interfere with the Chancellor’s plans and return the princess’s soul to her body.

Control in the game is very similar to The Legend of Zelda: Phantom Hourglass: a player uses a stylus to control Link, use weapons and objects. To solve some problems, the game uses a microphone built into the console. In some cases, Princess Zelda can enter the bodies of opponents, after which they can also be controlled with a stylus. As the game progresses, the player restores the Spirit Tracks, along which Link can travel on a steam locomotive equipped with a cannon for shooting enemies, a beep, as well as a freight wagon for transporting various things. Also in the game there is the ability to transport passengers by train for certain rewards. In the game, you can again play the Perfume Flute using the microphone and touch screen. Unlike the previous part, the game lacks multi-user mode through Nintendo Wi-Fi Connection. However, there is the possibility of playing together (up to four people) through the DS Download Play function.
‹
›
Home
View web version