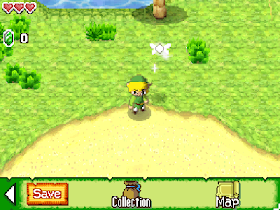 Genre: Action
Perspective: Bird's-eye view
Visual: Fixed / flip-screen
Gameplay: Metroidvania, Puzzle elements
Interface: Point and select
Vehicular: Naval / watercraft
Setting: Fantasy
Published by: Nintendo of America Inc.
Developed by: Nintendo EAD
Released: 2007
Platform: Nintendo DS (NDS)
While traveling through the seas after the events of The Legend of Zelda: The Wind Waker, Tetra comes across a strange ship that looks like a Ghost Ship. Tetra gets on board this ship, and it immediately begins to move away from the Tetra ship. Link jumps onto an ominous ship, but just clings his hand overboard; Tetra’s ship instantly hides in the fog, Link clings with his other hand overboard, but soon slips and falls into the water. Soon Link is lying on the shore of Ciela.