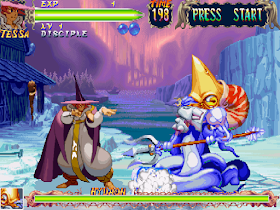 Genre: Action
Perspective: Side view
Gameplay: Arcade, Fighting
Setting: Fantasy
Published by: Capcom Co.
Developed by: Capcom Co.
Released: 1996
Platform: Arcade Machine
There are four characters that can be used by the player, and eight those controlled by artificial intelligence; as a game mode there are only the "Quest" and the "Versus".
Quest mode is the one where the player will have to try, once the character is chosen, to bring the adventure to an end, freeing the world of Red Earth from the dark forces that have invaded it; the story is slightly different depending on the character, but it is still composed of eight stages, beyond which you can get experience and related bonuses; different are the places of departure, according to which of the characters you have chosen, since each of them is resident in realms geographically located in different continents.
The Versus mode is trivially the two-player mode against each other, but the choice between the roster of 12 characters is limited to the four heroes of the Quest mode. Red Earth has a password saving system: once a certain level is reached, at a certain difficulty, a password is provided, thanks to which it will be possible to resume the game from the goal to which it has been reached, inserting it in the start screen.
The sprites and backgrounds are very reminiscent of the realistic style of Street Fighter, although there are some differences. First, the opponents' energy is shown at the bottom of the screen, resulting in huge proportions, compared to that of the player.
In addition, Red Earth is one of the few Capcom games to have brutal "finishing moves", which include vertical or horizontal slashes capable of cutting the opponent in two, decapitating him, crushing his limbs, cutting off his organs, tearing him apart . Darkstalkers, another Capcom product, also shows similar content, albeit more moderately.

Red Earth takes place on an alternative version of planet Earth in the 14th century (in 1999 in the Japanese version); whatever the date, the civilizations of the Red Planet are still in a medieval stage, since there has not yet been any form of Renaissance or technological revolution. The evil Scion wants to subvert the current order and sends monsters to every continent to attempt to dominate the world, but four heroes arise to save it. In the different phases of the game a map of the planet appears several times. It can thus be seen that the Red Planet is made up of several continents divided by oceans and is very similar to the Earth also from a geographical point of view, so much so that you can recognize its continents:
Places attributable to Europe: in what appears to be the European continent there are the kingdom of Savalia (roughly corresponding to continental Europe), home of Leo and occupied by Hauzer, and the Frozen Land of Icelarn (corresponding to Scandinavia), home of Tessa and occupied by Hydron. In the map you can also distinguish the islands that remember, for their geographical position, Great Britain, Ireland, Iceland and Greenland.
Other toponyms: in Icelarn you can catch a glimpse of the word Frost North Plains along the north western coast.
Places referable to Africa: in the one reminiscent of Africa there is the kingdom of Sandgypt (a play on words between sand, sand, and Egypt, Egypt), home of the priestess Clara and Ravange. Between the area attributable to the Maghreb and the one resembling the Iberian peninsula there is an island that does not exist on Earth.
Other toponyms: in place of the Sahara desert is the word Sanada, while along the west coast there is the word Temple of the ancient.
Places attributable to Asia: the continent geographically attributable to Asia is very different. It contains Gora (corresponding to mainland Asia), home of Mai Ling and Lavia, and the kingdom of Zipang (corresponding to Japan), home of Kenji and Kongou. To the north there are islands reminiscent of New Zembla, while to the south east there are islands that, logically speaking, should represent Southeast Asia, despite the enormous differences in design.
Other toponyms: in these continents two mountain ranges are distinguishable, called Uranus (placed in place of the Urals between Asia and Europe) and Evelious (which could represent Mount Everest of the Himalaya chain). Along the northeastern coast is written The Black Plains. Off the southern coast of Zipang it says The kingdom of reece.
Places attributable to the Americas: two different continents are clearly distinguishable, one with the appearance of South America, where the Gi Gi Crypt is located, and one geographically located in place of North America, although it does not have the appearance of it. The latter sub-continent is not playable.
Other toponyms: to the north we see the writing Indeal Land along the southern coast, while to the south we read the writings Zonama in place of the Amazon Rainforest, The Crypt along the east coast and Aundes along the mountain range in place of the Andes.
Places attributable to Oceania: there is a large island geographically located in place of Australia and a smaller one in place of New Guinea. None of these places are playable.
Other toponyms: Auster is written on the main island.
Oceans: the names of 3 oceans / seas are indicated: Mariner between Europe and Iceland, Mislil Sea in south-west Africa and Neword Sea between South America and Australia.

There are 12 characters in the game, however only 4 are selectable. The player will face one of the 4 selectable characters only in Versus mode (against another player), while in Quest mode he will face the other 8 in random order, except the first (which depends on the chosen character), the seventh and the eighth character ( which are always Blade and Scion, in order).