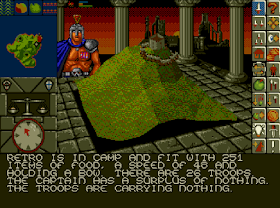 Genre: Strategy / tactics
Visual: Isometric
Pacing: Real-time
Setting: Fantasy
Published by: Electronic Arts
Developed by: Bullfrog Productions
Released: 1992
Platforms: SEGA Genesis / Mega Drive, SEGA CD / Mega-CD
After a massive earthquake destroyed their kingdom, the last 20 survivors set sail with their leader to find a new home. After several weeks, the seafarers discover an unknown, fertile country that is already inhabited by three peoples. The newly discovered world is divided into 195 regions, which are now all to be conquered individually.

The graphical user interface is divided into three areas: an overview map on the left edge of the screen, the interface with 20 command buttons and a detailed map in the middle with a greatly enlarged map section. The game world is shown on an axometric map, in which the camera rotation is limited to 90 degree steps and eight predefined image scales. The topography is created three-dimensionally by 128 contiguous polygons, all other objects such as people, vegetation and buildings are displayed as sprites.
The game had an advanced game engine for simulating artificial intelligence. Each non-player character (NPC) decides independently, without any influence from the player, about his profession as a fisherman, farmer, shepherd, forester or toolmaker. Each NPC can use a query mask to query the name, gender, age, loyalty, health, hometown and equipment. Although the terrain is not changeable as in Populous, actions have a limited effect on the environment. For example, if a larger area is cleared, the weather changes and more rain or snow falls depending on the season and slows the movement of the NPC.
‹
›
Home
View web version