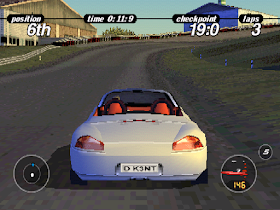 Genre: Racing / driving
Perspective: 1st-person, Behind view
Visual: Cinematic camera
Gameplay: Vehicle simulator
Vehicular: Automobile, Track racing
Published by: Sony Computer Entertainment America
Developed by: Team SOHO
Released: 1997
Platform: PlayStation (PSX, PS1)
If the famous car makers - the Porsche company - team up with the famous creators of the PlayStation game console, then you will get one of the best car racing games! You have to manage the latest sports model - the Porsche Boxter. SONY has not just obtained a license to use this model; the developers also received technical data from the designers of the car, thanks to which the game model reproduces the original in extraordinary detail and moves absolutely realistically (as much as possible for the game). At the beginning of the game, you can become one of the 7 drivers, and the style of the race depends on this choice. To more clearly describe this or that rider, the developers gave everyone a “second profession” - from kickboxer and hacker to test driver; there is both a model and a disc jockey, but the most desperate is a journalist named Nikita.
There are four tracks in the game - around Europe, the Alps, the USA and Japan, but they can be played in 20 different competitions. Starting with the Classic Mode, you must pass the race against time (at checkpoints - checkpoints). Next comes Interactive Mode, where secret rewards and bonuses will be your reward. After that, you must defeat the experienced pilot in Test Driver mode - on the track, which is an exact copy of the Porsche testing ground in Stuttgart. Then there will be many more modes, including the longer Interactive Mode, Mirror Mode and Dream mode, where you yourself become a test driver. The decoration of racing games is always the modes of fights of 2 players; there is such a mode here, moreover, it is implemented not only by the link-up method, but also on one device with a split screen. Finally, there is a catch-up option, which, as it were, helps the lagging one to catch up with the leader, although here too the lagging one is required to show his skill and invention.
The developers took care not only of your car, but also that it was not so easy for you to ride it. Foliage is scattered on the tracks, on which it is easy to slip and go into a skid. There are puddles, dirt and other features of the real racing environment, so keep your eyes on the road!
The graphics of the Porsche Challenge are awesome! While Wipeout has better effects, the Motor Toon Grand Prix is more colorful, but the Porsche Challenge has the most realistic texture of tracks and objects on the sidelines. Your car and the cars of your rivals are perfectly modeled, there are no distortions and sharp transitions of polygons. Everything is fine and very neat. Perhaps the over-detailed image of the car is even a little distracting. The wheels turned out best, they turn and squeal at turns like real ones.

If you don’t know the short way, you will never win the race with the mysterious Test Driver’s - he knows all the tracks like the back of his hand.
Dan driver will only take a short road if you drive along it. Beats sometimes use a short drive (if it is open) independently of you. Nikita uses the open short drive only with you. Marco will cut the path with you with a probability of 20% in normal modes and for sure - in Hard difficulty mode. Taka - Bo will certainly go the short way in Evil mode, in other modes along with you. So, let's talk about the tracks ...

A. Two barriers drop on the first lap when they are switched. A “switch” is any driver crossing a stretch of road after turning. If two play, these barriers are always closed.
B. Four barriers block the other end of this section. Four more barriers open and close as the first driver approaches.
C. Two groups of barriers block the far end of the side road.
Cones are present in single player. When hitting them, the car jumps a lot.