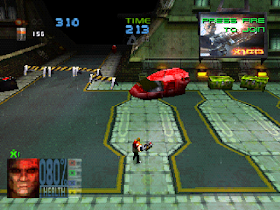 Genre: Action
Perspective: Bird's-eye view
Visual: 2D scrolling
Gameplay: Shooter
Setting: Sci-fi / futuristic
Published by: Infogrames
Developed by: Rage Games Ltd.
Released: 2000
Platform: PlayStation (PSX, PS1)
Millennium Soldier: Expendable is a colorful action shooter which takes place in a futuristic future where technology reigns and human life is depreciated. You act as a cloned soldier, raised specifically for military operations on other planets, a real killing machine - because you are a cloned soldier of the Millennium! By launching Millenium Soldier: Expendable for the first time, you might be surprised how little attention the developers paid to the plot and description of the history of the game events. One simple phrase "Defend the Earth from aliens" gives comprehensive information about the reasons for what will happen on the screen soon, and, in fact, is nothing more than an excuse for those who need to know why we perform certain actions during the game . And if some other representative of the genre were in place of the Expendable, perhaps it would be worth starting to resent. But, believe me, now this is exactly the case when the background of events would only hinder to enjoy the process. After all, after pressing the “New Game” button, you can no longer be distracted by any extraneous thought, or by any unnecessary action - like an unstoppable tsunami, the game stuns, covers, swallows a stunned person and sends him into the abyssal abyss of fighting against alien scum - until complete destruction of the latter.
As soon as you have time to take your first steps, getting used to controlling the hero, Expendable will turn into a real fiery tornado, illustrate in detail the very essence of the concept of "destruction" and turn over all your ideas about the dynamics of the game process. On the deserted streets of megalopolises attacked by aliens, in the depths of secret bases and dark subway tunnels - simply put, wherever the invisible ghost of the plot throws you, you will destroy with excitement in your eyes everything that gets in your way. Why? Yes, if only because in Expendable it is possible to incinerate most of the objects encountered, whether it be roughly knocked together boxes, red barrels with the word "Explosive" or wrecked police cars. You don’t need to talk about how enchanting it looks - a fiery halo surrounds our nameless hero throughout his bloody journey to the victorious end. Ordinary aliens turn into bloody scum faster than you have time to notice them - there’s no need to do an extra stop for aiming. But very soon, when we meet the first automatic turrets, flying officers and heavy attack armored attack aircraft, it comes to understand that the game offers us a serious test, requiring remarkable reflexes and the ability to quickly make the right decisions in critical situations for its successful completion.
First of all, unlike many other arcades, Expendable has a significant limitation on the number of weapons that you can carry with you. And on our brave character, albeit very strong and dexterous, there is no way to hang more than three types of guns - and it is not surprising, with their dimensions. It is even strange that he generally raises more than one ... What is good is that such a strict limit on deadly toys does not prevent one from enjoying the process of continuous shooting. After all, each machine gun, firearm, rocket launcher, any of a couple of dozen trunks presented here can be improved, and improved many times, turning even useless weapons that seem useless at first glance into a real catastrophe for opponents of all degrees of protection. But in addition to this, we have at our disposal the most powerful grenades, and the classic bundles of dynamite, and assistant robots firing on doomed opponents in automatic mode ...
However, in addition to the modest number of guns themselves, ammunition that is surprisingly fast-ending does not give a good walk. And the number of enemies multiplied by their persistence makes the lack of additional clips a serious problem. The hostages make the game even more interesting and at the same time more difficult, these unfortunate people clutching their heads at someone's approach, helplessly cowering in literally every corner and patiently waiting for their fate. A random shot, whether from your side or from someone else’s side — and the poor fell as innocent victims of war. But can you, the selfless defender of humanity, allow such an injustice? Of course not - and now you have to hold on to the fire, aim more carefully, substitute under the bullets to get the clogged people from under the ruins, and the success of such rescue operations completely depends on how skillfully and quickly you assess the situation.
But the crown of complexity and the most outstanding element of the game will undoubtedly be the bosses waiting for you at the end of almost every level. Huge robots and powerful fighting vehicles, automatic death stations and alien fighters - their destruction will require titanic efforts and concentrated firing at weak spots, which can be discovered far from immediately. And, mind you, ordinary aliens will also not disappear anywhere - they will try to stop you with all their might, not let them advance further and grind their commanders into powder. Take into account the time counter ticking inexorably at the very top of the screen, strictly measuring the seconds remaining for the task (and it counts just the seconds!), And you will understand why Expendable, in spite of all its furious rhythm and fury, is unlikely to pass in one breath, without numerous repetitions of unsuccessful moments.
Nevertheless, Expendable without a twinge of conscience can be called one of the best, most exciting and exciting 3D arcades. It should be tried by all lovers of dynamics and powerful, incomparable gameplay. Do not hesitate - there is enough thrill for everyone.