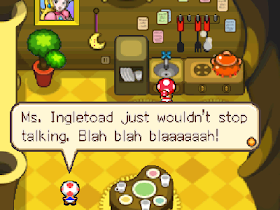 Genre: Action, Role-Playing (RPG)
Perspective: Bird's-eye view, Side view
Pacing: Real-time
Gameplay: Puzzle elements
Narrative: Comedy
Published by: Nintendo of America Inc.
Developed by: AlphaDream Corporation
Released: 2009
Platform: Nintendo DS (NDS)
Evil Fawful does not leave thoughts about the capture of the Mushroom Kingdom. The cruel Bowser is still hoping for family happiness with Princess Peach. This couple conspired again, but the consequences were unexpected: the magic mushroom planted by Fawful gave Bowser the ability to swallow objects - large and small. So Mario and Luigi, as well as Princess Peach, were in Bowser's belly. Do they have enough tricks and courage to get out and once again save the princess?