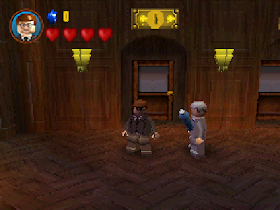 Genre: Action
Perspective: 3rd-person
Gameplay: Platform, Puzzle elements
Setting: Historical events
Published by: LucasArts
Developed by: Tt Fusion Ltd.
Released: 2008
Platform: Nintendo DS (NDS)
LEGO Indiana Jones - The Original Adventures is a game that combines a fascinating story, the action of blockbusters and the "corporate" humor of the LEGO video game series. You have to participate in almost all key episodes of the famous movie trilogy about Indiana Jones, but in addition to this, the game also contains characters from the fourth part of Indiana's adventures. In addition to Dr. Jones, his friends and assistants are waiting for you in the game: Marion Ravenwood, Short Round, Rene Belloq, Willie Scott, Marcus Brody, Jones the Elder and Mola Ram. Each of these characters has special characteristics and skills. In total, 60 characters are at your disposal, in addition, from their "details" you can create new characters - just like in LEGO Star Wars. There are many types of weapons in the arsenal of Indiana Jones, but it will be possible to use in battle not only pistols and swords, but also chairs, bottles and other improvised means - in a fight they will be no less effective than firearms. In addition to numerous battles with enemies, you have to smash your head and solve many puzzles and solve many secrets.
‹
›
Home
View web version