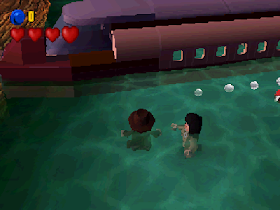 Genre: Action
Perspective: 3rd-person
Published by: LucasArts, Tt Games Publishing Ltd.
Developed by: Tt Fusion Ltd.
Released: 2009
Platform: Nintendo DS (NDS)
The game is based on all four films about Indiana Jones, including the last film of the series (Indiana Jones and the Kingdom of the Crystal Skull), which was not included in the previous part. Also, all levels from the first game have been completely redesigned.

The game can be played both alone and in a co-op with another person. In comparison with the first part, the levels for the first three films were significantly changed, and a campaign for the fourth part of the film was also added. In addition to the plot, bonus levels created using the level editor were also added. After passing through these levels, they can be changed.
The game also has a built-in level editor, where you can create your own levels. This game is the first in the Lego series, where the cooperative uses the split screen mode, that is, when the players move away from each other at a certain distance, the screen is divided into two parts, respectively, when the players approach the screen, it connects. The game world has also changed. Previously, to go to the level, you had to select it on the board. And in this game, one big world is created and the transition to certain story levels is scattered around it.