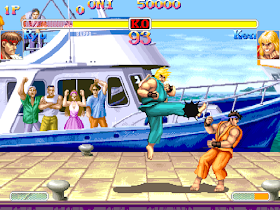 Genre: Action
Perspective: Side view
Visual: 2D scrolling
Gameplay: Arcade, Fighting
Narrative: Martial arts
Published by: Capcom Co.
Developed by: Capcom Co.
Released: 2003
Platform: Arcade Machine
This is the "Anniversary Edition" of the popular CPS fighting game and the prefix Hyper plays an important role here. In this new version, it became possible to choose the speed of the game when, as before, some could say that "it would be possible to move faster", not just increase it, but make it hyper. In addition to the speed of change, there have been changes in terms of graphics: it has become brighter and clearer. Of the fighters, no one was forgotten, we were still left with those who arrived from Super Street Fighter II: The New Challengers: T. Hawk, Fei Long, Dee Jay and Cammy, and all those who we liked so much. The music has also undergone changes: it has become cleaner and more diverse, Q-sound is immediately felt. In general, no fundamental changes occurred, because after all, a remake of the original and the main skeleton should be preserved.
‹
›
Home
View web version