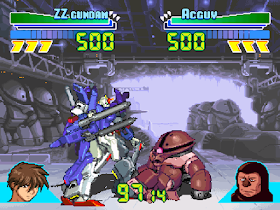 Genre: Action
Perspective: 3rd-person
Art: Anime / manga
Gameplay: Arcade, Fighting
Vehicular: Mecha / giant robot
Setting: Sci-fi / futuristic
Published by: Bandai America
Developed by: Natsume Co
Released: 2000
Platform: PlayStation (PSX, PS1)
The game combines the two most popular game concepts in Japan: imitation of martial arts and the battle of huge robots. Gundam is a well-known (in Japan) animation series, the plot of which revolves around the huge transforming robots and the pilots who control them. These robots used to hang around the galaxy, shooting at each other. Now they have mastered some methods of hand-to-hand combat and turned into characters in the game. Unfortunately, the set of combat techniques is not so great - punches, kicks, laser shots, swords and several special techniques, the composition of which is almost the same for all characters. Differences between robots, in addition to appearance, are in the speed of their movement and a set of additional mechanisms. As for the duel strategy, everything is also very simple here: choose the right weapon, kick your opponent’s head, and then hammer him with the sword as much as possible. Repeat this sequence of actions several times, and the victory is in your pocket.
The graphics and animations for 2D fighting game, which is Gundam Battle Assault, are made at a high level. The characters are very large, some bosses larger than the screen, move very smoothly and naturally. Background screens look great.
‹
›
Home
View web version