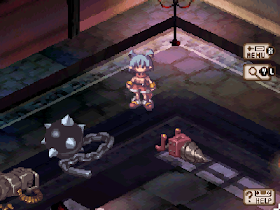 Genre: Role-Playing (RPG), Strategy / tactics
Perspective: Top-down
Pacing: Turn-based
Setting: Fantasy
Published by: NIS America
Developed by: Nippon Ichi Software
Released: 2008
Platform: Nintendo DS (NDS)
The story begins with the scene of the rise of Laharl. Etna, one of his subjects, stands in front of him and shoots with everything possible to wake Laharl with a sound. After Laharl finally wakes up, she explains to him that while he was sleeping for 2 years, his father, King Krichevskoy, died. Laharl decides to become Lord of Netherworld. After a little consultation with Etna and other subjects, they gather on their way to Vyers Castle
After defeating the demon Vyers, who called himself Dark Adonis and was immediately renamed Laharl into Mid-Boss, Laharl meets the intern angel Flonne. Flonne was sent to Netherworld by Seraph Lamington, ruling Celestia, to kill King Krichevskoy (who had already died). Shocked at the fact that Laharl does not care about the death of his father, the cheerful Flonne joins Laharl to find out if the demons are able to love. However, they are watched by the archangel Vulcanus, who perceives Flonne's actions as a conspiracy against him.
After Etna asks Laharl to give out the salary of the Prinnies she hired, he decides to attack the demon with a fat wallet nearby. It turned out to be the Hoggmeiser living in the Dinero Palace. After the Hoggmeiser lost, Laharl is about to kill him, but suddenly the Hoggmeiser’s son runs out of nowhere. He asks Laharl not to kill his father, Flonn also convinces Laharl not to do this. In the end, Laharl takes the money and Hoggmeiser joins him.
One day, Flonne and Etna find a photograph with Laharl, captured in something extremely funny. On the back of the photograph it says that copies of these photographs will be distributed throughout Netherworld if it does not accept the call. Laharl resolves to this challenge. He meets Maderas, a vampire. The vampire was expelled by King Krichevskoy for stealing the King’s favorite delicacy - black pretzels. Maderas uses his two biggest weaknesses against Laharl - kindness and women with sexy bodies. Also, Maderas controlled Etna's mind by stealing her memory. He forced her to kill the prince, but she poisoned him to sleep 2 years. Ultimately, Etna betrays Maderas.
Later, Flonne wakes up at night and sees several Prinny singing, leaving the castle. Laharl, worried that his reputation would be tarnished if it is discovered, leaves the castle and sets off after Prince. As a result, he faces Death and we learn that Big Sis Prinny is, in fact, the mother of Laharl. She became Prinny because she gave her life to save her son ...
After Laharl becomes Lord of Hell, he meets several people from Earth. Gordon, Defender of Earth (Gordon, Defender of Earth), Jennifer, his assistant, and their robot Thursday. Gordon thought his mission was to kill Laharl by preventing the demons from attacking Earth. Laharl promises not to invade Earth if Gordon defeats him or Gordon becomes one of his subjects in case of loss. Gordon is losing. After the Earth Defense Force appears in Netherworld, it becomes clear to Gordon that he was sent in order to open the way for the invasion of people in the Underworld who were in collusion with Vulcanus.
General Carter sends Kurtis to the Underworld and ultimately flies there himself on the Space Battleship Gargantua. Curtis then abducts Jennifer and Laharl orders to destroy all ships except Gargantua. When Laharl and his friends get to the bridge, they are attacked by several angels from Celestia. After the defeat, General Carter leaves the ship, suddenly out of nowhere appears the Mid-Boss to find out something.
In response to this, Flonne decides to go to Celestia to speak with Seraph. Vulcanus goes to Seraph Lamington and reports that Flonne is a traitor who leads an army of demons to invade Celestia. The volcano declares that he wants to capture all three worlds (Celestia, Hell and Earth) in order to rule them as God. After defeating Vulcanus, Laharl finally meets with Seraph and Flonn explains to him the plan of Vulcanus and what she learned during her trip with Laharl. Seraph accepts her version of events and agrees that demons are able to show a feeling of love. However, this does not cancel the punishment, as she fought against other angels. And he turns her into a flower. Struck by such injustice, Laharl kills Seraph in the final battle.
Thus, from the almost loser with whom Laharl appears at the beginning of the game (having overslept the death of his own father), he turns into a hero.
However, the game has several ending options. For example, the Seraph may survive / not survive. Flonne can be restored or turned into a Fallen Angel. Laharl can become a great Lord and disappear, leaving Etna to watch over Hell. Or he may die and become Prigny. It can also be noted that in the good ending, when the spirit of Laharl’s mother comes to him, Vyers seems to have known her for a long time, and the way he speaks with Laharl suggests that Vyers is King Krichevsky.
During the game, the team contains angels, people and demons, which resembles the plot of Grandia II or yakusoku no chi Riviera (some of the creators of the first Grandia participated in its development). In addition, hints of Super Sentai, Cyborg 009 (Curtis), Rozen Maiden (the store is called the Rosen Queen's Underworld affiliate), Langrisser (the name alludes to the second part of the series, Gaia no monshō) are noticeable in the game.
‹
›
Home
View web version