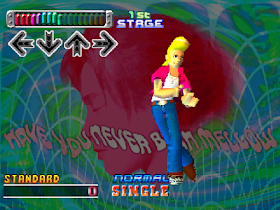 Genre: Action
Perspective: 3rd-person
Gameplay: Music / rhythm
Published by: Konami of America
Developed by: KCE Tokyo
Released: 2001
Platform: PlayStation (PSX, PS1)
Dance Dance Revolution is a music video game series from Konami Digital Entertainment, Inc, also known as the Dancing Stage. It was first presented as an arcade game machine in Japan in 1998 at the Tokyo Game Show. Since then, the series has gained great popularity around the world. To date, more than 100 versions of this game have been published (taking into account all console versions and regional differences). Dance Dance Revolution (hereinafter DDR) is the largest series in the so-called Bemani-family of games. To date, over 1,000 different songs are featured in all official DDR versions.
The game takes place on a dance platform with four panels: “up”, “down”, “left” and “right”. During the gameplay, a sequence of arrows moves around the screen that matches the musical rhythm of the song being played. The player must press the corresponding panels with his feet to the music at the moment when the arrows coincide with the translucent stencil, usually located at the top of the screen. Each time you press the player correctly, the level of the “life scale” is gradually replenished. For each miss, a certain amount of energy is taken from the scale. A round is considered to be lost if the player at least once during the passage of the song allowed the level of the “life scale” to drop to zero. It is also possible to play on any of the possible controllers (in versions for consoles).
The first version of DDR was introduced to the general public in October 1998. At that time, another game of the Bemani family, Beatmania, was most popular. In order to promote her new music game as soon as possible, Konami entered into a licensing agreement with Toshiba-EMI and a number of artists whose musical compositions were part of DanceMania, a collection of dance music popular in Japan at that time. In the first months after the release of the arcade machine in many gaming centers in Japan, the excitement was so high that those who wanted to try out a new game had to stand in long lines for several hours. In those days, the maximum complexity of the game seemed to many quite high. In the "Single" mode, 3 difficulty levels were presented: "Basic", "Another" and "Maniac". In the Double mode, there are only two: Basic and Another. There were only nine tracks on the machine, among which the song “Butterfly”, performed by smile.dk, instantly became a hit.
The main drawbacks of the game are the significant out of sync of the arrows with the music in some songs, as well as the end-to-end “flying” of the arrows through translucent stencils even if they are pressed successfully. However, despite several serious flaws, the game was warmly received by the vast majority of gaming critics in Japan and received positive reviews in many gaming publications.
A month after the release, a new version of DDR was released - 1.5, also known as DDR 1st: Internet Ranking Version, which includes a number of fixes and improvements. In addition to the innovation with the ability to save the results of passing songs on a special Konami website, the new version eliminated problems with the out of sync of music in some songs. Upon receiving the “Perfect” and “Great” ratings, the arrows began to disappear from the screen instead of “flying” behind the transparent stencils. For some songs, the difficulty level was increased to 8 legs and was called "EXORBITANT". Songs of complexity 7 legs came to be called “PARAMOUNT” instead of “HERO”. In Double mode, the difficulty levels of Another and Maniac were combined.
This version of the game is the port of the very first 1998 slot machine game. In Japan, the release took place in 1999, and outside of Japan only two years later. In addition to the current name, the game has two unofficial ones - Dance Dance Revolution (1stMIX) and Dance Dance Revolution USA Mix. The European release is published as Dancing Stage Euromix.
‹
›
Home
View web version