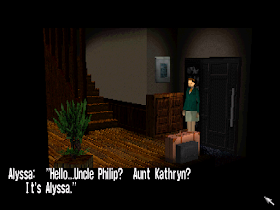 Genre: Adventure
Perspective: 3rd-person
Visual: Isometric
Gameplay: Puzzle elements, Survival horror
Narrative: Detective / mystery
Published by: Agetec
Developed by: Human Entertainment
Released: 1999
Platform: PlayStation (PSX, PS1)
The game is the third in a series of games of the same name (see description of the original game). The plot of the game is not connected with the previous parts of the series. In terms of the plot, Clock Tower II: The Struggle Within offers a completely new story related to the previous parts with only small references, and tells the story of the fate of the 17-year-old girl Alyssa, suffering from an inexplicable split personality, manifesting herself in moments of psychological shock or severe stress. Usually she is a sad, inconspicuous girl, but in the depths of her subconscious mind there is also a second personality - her twin, a cruel guy named Bates, who makes itself felt. Alyssa began to have visions of how she kills her friends and family, which began from the moment when her father gave her his amulet to her. Once Alyssa wakes up and realizes that everything has become true. Inside the girl is the "cold-blooded and immoral" spirit of Mr. Bates, forcing her to do such terrible things. But the father's amulet helps Alyssa to avoid the interference of the spirit. This feature of the plot not only adds psychological overtones to the best traditions of Stephen King's works, but also automatically leads to the appearance of original innovations in the gameplay: so our protagonist has two psychological phases, she constantly balances between her female personality and the personality of her male alter ego, which greatly affects the solution of puzzles, visiting locations, as well as dialogs and the development of history. For example, you risk bringing a desperate woman to suicide if you talk to her in a state of cruel Bates, but in the same place this person can protect you from danger at certain times and do what a mild and indecisive Alyssa would be unable to do. Switching is mainly due to life-threatening moments and an amulet presented to Alyssa by her father in childhood, who for some reason knows how to restrain the influence of Bates’s personality. That is, if you remove the amulet and someone attacks you, you automatically enter the Bates phase, and then, putting the amulet back on, again become Alyssa.
Another innovation was that if earlier only a single maniac was hunting you during the game, now at each stage you will be chased by different marginal types - including living dolls with kitchen knives, the dead, and, finally, a special star Clock Tower 2 - a psychopath in a bloodstained robe and a red mask hiding his true appearance, armed with a huge one and a half meter knife that can cut anyone into bloody pieces of meat.
Finally, another ending for the game was the number of endings in the game. There are 13. Yes, you heard right, there are THIRTEEN, most of which show the different death of the protagonist. Honestly, even now I’m not able to recall something with a game with more endings - not only in the horror style, but in general at least some kind of game ... So, I think, Clock Tower II: The Struggle Within in this The attitude is quite unique.
Also, like other games in the series, Clock Tower II: The Struggle Within is a Survival Horror in which the player needs to solve puzzles, hide and, quite rarely, fight enemies. The game interface consists of a point-and-click system. Also in the game there is an inventory screen that appears if the player moves the cursor up. The game engine is very similar to the previous game in the series - Clock Tower (known in Japan as Clock Tower 2).

Get all thirteen endings and the "Guide" option will open in the Pamphlet menu. This will allow you to get acquainted with the biography of each of the characters.

To access the option "???" in the Pamphlet Menu, win the game with an “A” ending. Now at your service is the new Extra Mode, where there are such cool mini-games as Time Attack and Score Attack.

Hold L1 + L2 + R1 + R2 when starting a new game (on the title screen). After the game begins, you can use powerful spells of almost unlimited power.