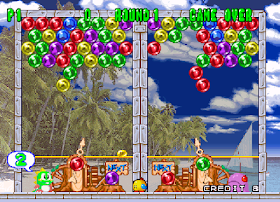 Genre: Puzzle
Perspective: Side view
Visual: Fixed / flip-screen
Gameplay: Arcade, Tile matching puzzle
Pacing: Real-time
Published by: Acclaim Entertainment
Developed by: Taito Corporation
Released: 1996
Platforms: SEGA Saturn, Neo-Geo
The game is based on the original by adding a tournament-style variation for the multiplayer mode and a branched map for the single mode, thus giving the player the possibility to choose one of the two groups of five proposed levels and the possibility of obtaining alternative endings. Several contestants appearing in tournament mode are based on some characters featured in the Bubble Bobble title, including the Monsta pink monster and the ghost Mighta.
In addition, some editions such as the one for PlayStation, include timed challenges where the player must complete rounds of simple difficulty in a time sufficient to beat the records previously recorded or those of the other rival, in the event that a game takes place between two players.
By completing the single player mode, a code will be provided that can be entered to unlock the "Another World" function, which includes some small changes to the existing levels including the increase in difficulty and the backdrops, which are rendered similar to those found in Bubble Bobble. In addition, several enemies of the same title appear in the background during the credits sequence.

The style of play has remained unchanged compared to the previous episode, in fact the goal is to aim at the colored bubbles with the directional buttons and shoot with the appropriate button in such a way as to make them explode, connecting three bubbles of the same color together. The game ends if a bubble crosses the line located in the lower corner of the screen.
Puzzle Bobble 2 is divided into four different modes, the first is called Puzzle (Puzzle game in the Italian edition) in which one or two players will have to advance between the letters of the alphabet placed on a path, with the aim of solving the problem. puzzle, which will become progressively more difficult as the completed levels progress, five for each letter. The other modes are Player Vs Computer (Player against Computer) where you will have to face a series of opponents controlled by the CPU until you reach the final boss, Player Vs Player (Player against player) where two contenders will compete against each other and finally Timed Attack (Time Attack) where the rules remain the same as in Puzzle, only on this occasion you will have to try to get the best time by blowing all the bubbles for a total of fifty different paths.
‹
›
Home
View web version